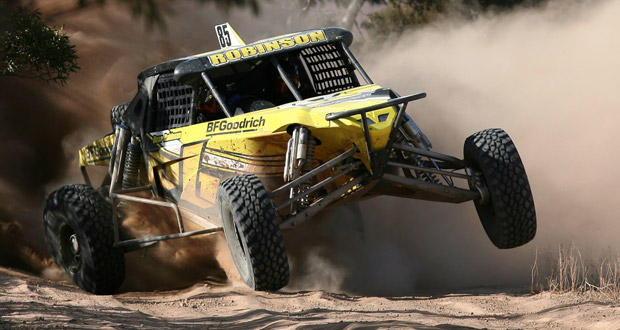 In just under a weeks’ time, Alice Springs in the Northern Territory will play host to Round 2 of the Australian Off Road Championship, the Tattersall’s Finke Desert Race. 100 Cars and 550 bikes will tackle some of the harshest terrain in the southern hemisphere in an all-out dash to see who will be crowned King of the Desert.

One of the leading teams to tackle ‘The Finke’ will be Perth based Outer Bounds Racing, with Travis Robinson and Paul Currie aboard the #13 Twin Turbo V6 powered Jimco and Beau Robinson and Adam Trewhella in the #85 Jimco.

The team is no stranger to the Finke, and after qualifying first and second there in 2010 the team are keen to put last year’s disappointment behind them and string together a good run for both cars.

“Last year at Finke was full of ups and downs. We won Prologue and Trav was second, but on race day after both of us were leading through the first couple of checkpoints, both cars didn’t make it to Finke” stated Beau. “Hopefully we can have another good run in prologue and make it there and back.” 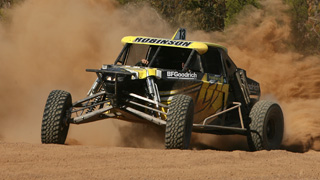 Unfortunately Round 1 of the Australian Off Road Championship for 2011 was also very cruel to OBR, with Travis and Paul leading the event in the #13 Jimco until an axle failure put them out 15km from the finish.

“I think we will be OK this year. We have the cars sorted so there is not much else we can do. We just need a bit of luck to fall our way and we will have the perfect package” said Travis. “We were competitive at Hyden, but it didn’t turn out so well. We will be looking to make a point at Finke.”

The OBR team will be looking to beat one of the best fields in history, with 98 entries looking to take the King of the Desert Crown.

The event will start on Saturday 11th of June with qualifying, with the race proper on Sunday 12th when the cars race south from the Alice Springs start finish arena to Apatula (known as Finke) along the Old Ghan Railway line in a 240km rough and rugged all out sprint. Then on Monday 13th the crews will head back along the same track in reverse to the finish in Alice Springs.

OBR fans can visit www.outerboundsracing.com.au to follow the Outer Bounds Racing Team’s progress before, during and after the race with live reports and photos coming in from the track at Finke. Fans can also follow the team’s progress on Facebook by clicking on the “Become a Fan” tab on the Facebook page.

Also watch out for OBR’s Video series which will have coverage from each event on the Official YouTube page at http://www.youtube.com/obr184 or follow the links on the OBR website.