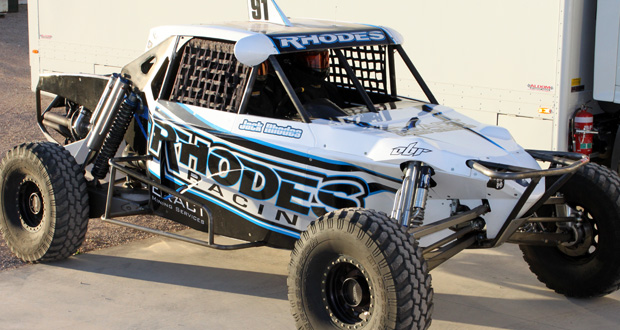 Round 2 of the South Australian Off Road Championship has roared into action with the prologue at the Exact Mining Bentleys Cabin Park Flinders 400.

Clocking up the fastest qualifying time was young gun Jack Rhodes with Craig Mattingly in the navigators seat of the ex Beau Robinson OBR Jimco in a time of 5:18 seconds. This is the first event for Rhodes and the Exact Mining #91 Jimco since a complete rebuild and overhaul for the 2012 season.

Second on the time sheets in 5:21 seconds was the Baroota track landowner Hayden Bentley in the Racer #18 with Andrew Kittle and Andrew Kerr racing the #14 Peter Kittle Motorsports Jimco into third in 5:23 seconds.

Brad Gallard and Scott Modistach failed to finish their prologue run after hitting a ditch and losing all forward gears in the gearbox.

Fourth outright was the first of the Element Racing Team stable Pro buggy #56 of Carl Haby and Brenton Gallasch in 5:27 seconds with James and Grant Madden rounding out the top five in The Off Road Shop Razorback #81.

Sixth was Brenton and Terry Forsyth #47 while Aaron Haby drove the single seat Element #57 into seventh, doing a conservative run following a complete engine rebuild after round 1 of the South Australian Off Road Championship at Mannum two weeks ago. Eighth and the first of the ProLites was the Mildura based team of Aaron James and Brett Plant in the #101 Razorback in 5:34 with Wes and Bill Cowie in ninth in a time of 5:30.

Rounding out the top ten and the last to qualify for the top ten shootout was the #135 Team Hosetech Razorback piloted by Andrew Mowles in 5:40. Mowles crossed the finished line with the front right wheel at right angles to the buggy after hitting a large tractor tyre on the course that was being use as a track marker. The Razorback sustained major damage to the front right suspension including a broken top arm, bent tie rod, bent shock absorber. The team is attempting to patch it up to enable Andrew to compete in the Top 10 shootout as they would like to improve their starting position at least to be in front of the other ProLites.

In his second race of the Peter Kittle Motorsport ex Dave Fellows #1 Jimco was Matthew Kittle and Cameron Karl running under the #23 plate. Ivan Robertson and Gavin Mickle have secured 12th; mammoth effort for the debut drive of the new MickleFab Mid Sized Trophy Truck #471.

Sam Gadaletta finished the prologue in 13th with Brett Reimann #412 in 14th. Leanne Walker behind the wheel of the #42 Rid Race frame drove into 15th, taking the wheel of the Pro buggy while waiting driver Wally Francombe to arrive at the track.

The Top 10 Shoot out is schedule for 12 noon with racing to get underway at 1:30pm South Australian Time.