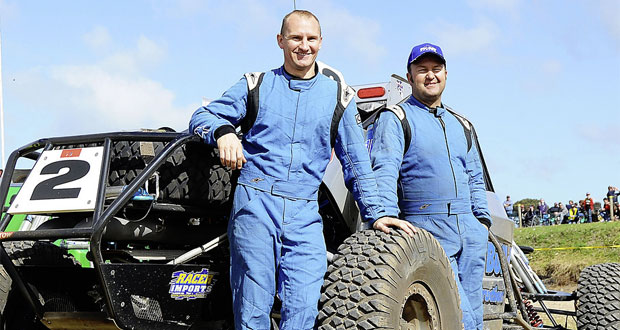 With their aspirations of being crowned the 2011 Australian Off Road Champion riding on the fifth and final round of the championship at the 2011 Albins Off Road Gear Goondiwindi 400, the True Build Racing team of Dan Auricht and Grant Connelly are leaving no stone unturned, no screw untightened, every component check, doubled check and lubricated.

“Our whole year of racing the Australian Off Road Championship is coming down to this one event. It’s great to still be in there with a chance for Aussie #1 although Dave has got it pretty well sewn up if he doesn’t have any problems, but in off road racing anything can and will happen” commented Grant Connelly, team navigator.

After taking a cautious approach at Teagle Excavations ARB Pines Enduro 400 the team know that they can’t hold anything back. Their game plan at the Pines paid off well and they consolidated their position and secured valuable championship points. “We will not be holding anything back at Goondiwindi, with the aim of being out front at the drop of the flag; it won’t be easy with the quality of teams competing. We just have to race hard and focus on being the quickest car on the weekend” said Connelly.

“We could end up with Aus #1, 2 or 3 after Gundy, or off the podium altogether. There’s too many what if’s, but we are going there with the intention of giving it our all. Whatever the outcome at Goondiwindi, and where we end up in the Championship, we can look back and say it has been a good year of racing with a great bunch of people” added Auricht.

The Albins Off Road Gear Goondiwindi 400 commences with scrutiny on Friday at the Goondiwindi Showgrounds from 4pm. It will be a great opportunity to meet the team and see the True Build Jimco up close. Racing commences on Saturday morning with Prologue followed by the Top Ten Shoot Out and then two laps of the 80km long course. Sunday will see another three laps of the course; it will be two entertaining days of racing.