Business As Usual For Peter Kittle Motor Sports At Gundy 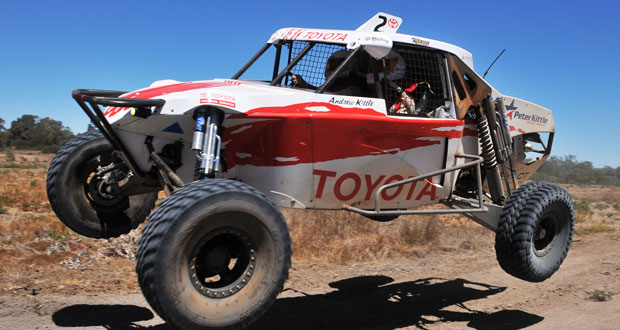 Peter Kittle Motor Sport heads to final round of the 2011 season at Goondiwindi this weekend, aiming to lock away back to back Australian Off Road Championships. Clinching their first title in 2010, David Fellows and Mark Bergamin have placed the teams #1 Jimco at the top of the leaderboard at the business end of the 2011 season.After taking outright wins at the ARB Pinjarra Engineering Hyden 450, Bentleys Cabin Park Flinders 450 and Teagle Excavations ARB Pines Enduro, a final five lap blast at the Albins Off Road Gear Goondiwindi 400 will determine the championship.

“We are very happy with where we are heading in to the final round. We believe that if we didn’t have a problem at Finke we would have been up four nil. The team are looking forward to it and would like to win the last race of the year to top it off” said team owner Peter Kittle.

Extra championship points are on offer at the final round in Queensland, meaning the healthy lead Fellows has generated throughout the season is not out of the second placed Auricht’s grasp.

“I am not a big fan of the extra points that are on offer at the final round. It would be a shame to see someone who has dominated all season lose a championship, whether it be outright or in the classes, as a result of the extra points on offer. I understand why they’re there, but I think the focus should be on the event organisers to make the events attractive regardless of the points.”

“We will go into the race with the same approach that we used at the Pines. The best way to win championships is to win races and we are not going there just to cruise around. We need to finish sixth or higher to seal the championship, so we aren’t going to just circulate and find out we have finished seventh.”

“We have prepped the car no different to what we have done for any of the other rounds this year. However, we might carry some extra spares on board for insurance. It’s a plan which paid dividends when a CV failed at Finke which allowed Dave to come away with some points.”

The event kicks off with scrutiny on Friday night at the Goondiwindi Showgrounds, before heading out to Lofty’s Lair for the main event on Saturday and Sunday where the twin turbo charged Toyota V6 powered Jimco will be fired up in anger to tackle the famous melon holes and whoops which resemble an ‘X-rated’ rollercoaster ride.

“We like the continuous format that Goondiwindi has reverted to this year; the drivers can get in a rhythm and keep going.”

The event concludes on Sunday night with a presentation dinner at the Goondiwindi Cultural Centre. In a new initiative the 2011 AORC Champions will be crowned, along with the Albins Goondiwindi 400 race winners, making it a night to remember.

“I think it is great that our champions will be recognised in front of people who appreciate our sport and the achievements of the drivers” said Peter Kittle..Author: Randall Kilner
Source: Randall Graphics (PR Division) Pty Ltd
Photographer: Randall Kilner