Home / New new new / Fellows Goes Back to Back

Fellows Goes Back to Back 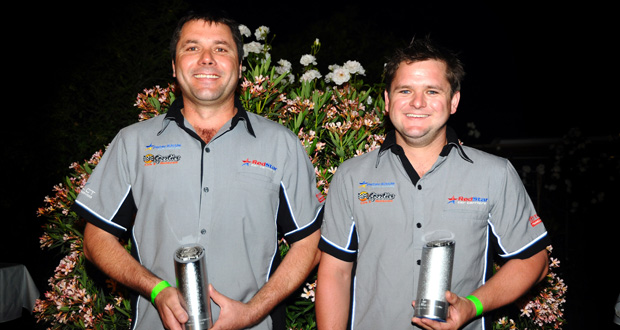 Reigning Australian Off Road Champions David Fellows and Mark Bergamin have sealed back to back AORC titles for Peter Kittle Motor Sport on the weekend, after the final round of the 2011 championship, the Albins Off Road Gear Goondiwindi 400 held in Queensland, was cancelled before a wheel could be turned in anger after major storms passed through the region on Friday night, washing the event out.Fellows went in to the event sitting on 63 championship points, with Danny Auricht the only other driver capable of snatching the number one position. However with the track already waterlogged after recent heavy rain, the event organisers were left with no other option but to cancel the event after a series of storms dumped another two inches of rain on the track late on Friday night. This left Dave Fellows and Mark Bergamin out in front with 63 points, ahead of mid-mounted V8 Jimco of Danny Auricht and Grant Connelly in second with 40 points and the Tattersall’s Finke Desert Race winners Greg Gartner and Jamie Jennings in third on 28 points.The well constructed season saw Fellows win three out of the four championship rounds prior to Goondiwindi, which placed him in the box seat prior to the final round. 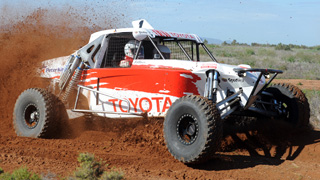 “We got the results we were looking for during the year to put us into this position, so we are very happy” said Fellows, continuing “the car is a really good package at the moment, it is competitive and we have been very happy with the Toyota engine and Albins transmission packages that we have had, and we believe the Toyota engine has given us the edge over the rest of the field.”

With Andrew Kittle stepping behind the wheel of the teams #14 Jimco in 2010, Mark Bergamin took over as Fellows co-driver.

“Last year was a bit of a learning curve for Mark, but he has become really hands on preparing the car and is always up there on the weekends helping us out. This year Mark has probably spent more time preparing the car than me, as I have been busy with other commitments. In the race car Mark is always on the ball and I am looking forward to continuing the partnership next year in the truck” said Fellows.

Team owner Peter Kittle, was equally as satisfied with the team’s performance.

“It would have been better for everyone if there was a race on, but no one can control the weather and unfortunately for the organisers it was out of their hands. We’re rapt that we have won another championship. It took us a long time to win a Finke Desert Race and a long time to win this and then we won three Finkes in a row, so maybe we can win three of these in a row?”

“It has been a long year and a lot of competition and the team has put in an excellent effort. The car has been prepared well by Rob and the boys couldn’t have driven better in any of the races. We had a little hiccup at Finke, but Dave’s never say die attitude allowed us to pick up some points which came in handy at the end. There are a lot of people out there trying to knock Dave off and that has spurred us on.”

“To win this championship you need to be good with your maintenance and have a never say die attitude because it comes right down to the wire” said Kittle.

Fellows and Bergamin were presented with their 2011 outright AORC trophies on Saturday night dinner in Goondiwindi.

“I think it is a good thing that the champions get presented their awards in front of their peers. The night went over very well and I’d like to see that continue on” added Peter Kittle.

2012 will see a change to the line-up at Peter Kittle Motor Sport, with Dave Fellows making the switch to the new Jimco truck.

“This is my twentieth year of driving a buggy and getting into a truck next year will be definitely something different and a challenge that I need to do. I still enjoy driving the buggies, but I am looking forward to the new challenge and hopefully get in there and be competitive” said Fellows.

“We are also turning Dave’s current car into a ProLite, which Matthew Kittle is going to drive, and we are currently doing some work on Andrew Kittle’s car to up-spec it and hopefully we will do the first couple of rounds next year and see where we are sitting” said Peter Kittle.

In the short term, the Kickstarter’s Gascoyne Dash is now firmly on the agenda for Peter Kittle Motor Sport. Andrew Kittle’s #14 Jimco is almost ready to be loaded on the truck for the trip West, and with Fellows Australian Championship winning Jimco ready to race after the cancellation of Goondiwindi, there is a good chance he will join Andrew at the new look event.

“Andrew is looking forward to it as he missed a few rounds due to work commitments, and when you look back at the results and points he might have done alright in the championship, if he kept cruising around. But he has had a break and is keen to get back into the car. We’re looking forward to it.”