OBR gas it up at the Dash 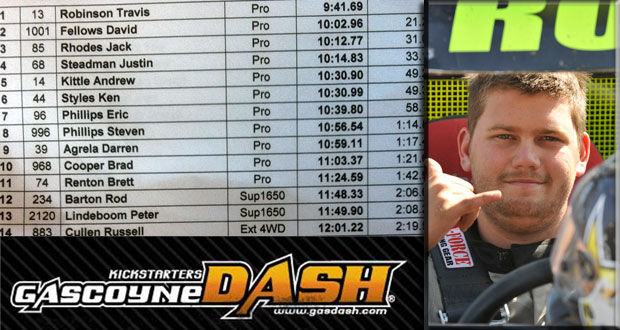 Outer Bounds Racing have ruled at the Kickstarters Gascoyne Dash for years, with team stalwart Brian Robinson taking out a trifecta of wins before handing the mantle to youngest son Travis last year; not letting the side down, Travis Robinson and Paul Currie have blitzed the field in todays prologue by 21.27 seconds, recording a time of 9.41.69, driving the OBR Jimco to first on Saturday’s start grid.

Current Australian Off Road Champions David Fellows and Mark Bergamin negotiated the Carnarvon prologue track in 10:02.96, clocking up their first competitive miles at the legendary Western Australian event, with fellow South Australian Jack Rhodes rounding out the prologue podium in 10:12.77, 31.08 seconds off Robinsons pace; an impressive drive for Rhodes who has stepped up from his ProLite Chenowth to the ex Beau Robinson OBR Jimco #85 for the Kickstarters Gascoyne Dash.

Teams will now pack up the transporters and head down the road, 200km east through Gascoyne Junction to Coonatha on Bidgemia Station, just west of the Kennedy Ranges in the upper Gascoyne, the staging ground for the start finish arena, in readiness for Saturday’s long lap, backed up on Sunday by a further loop around Bidgemia Station. Festivities will wrap up on Sunday night with the presentations at celebrations at the Coonatha Race Complex.