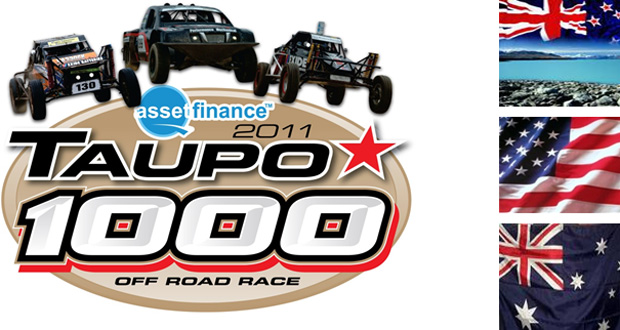 Australian off road racer Brad Prout has won the longest and toughest off road race in the southern hemisphere, leading both days of the 1000 km event held in pine forests near Taupo. 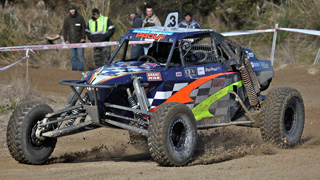 Sub-zero overnight temperatures froze track surfaces in the forest, making braking and cornering fraught for the racers at the front of the field, who were reaching speeds of 220 km/h in the faster sections of the 50 km lap. 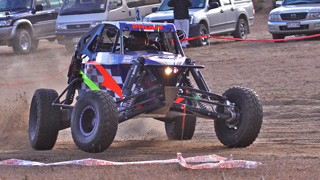 At race start, Horan and Prout were locked in battle for the lead through most of the first day, but Horan fell back in the closing laps of Saturday when he had a flat tyre that in turn caused wheel and suspension problems.

Behind these early leaders Whakatane’s Clive Thornton had been part of a group of unlimited class cars that chased Prout and Horan on the first day that also included Whangarei’s Melvin Rouse and Malcolm Langley.

Though 2009 Taupo winner Thornton had been slowed after pitting early to fix a flat tyre, the teams big US-designed Desert Dynamic Chev race car was quickly back up to speed and forged through to the front. The team was also concerned about a driveshaft problem that cropped up early in the race.

The race was not kind to former winners on that first day: former race winner Clim Lammers from Hikurangi was there in a new car, but smashed the front suspension and was out of contention for the race. Multiple Taupo 1000 winner Tony McCall (Manukau) had a new car but was out after destroying the front suspension on the opening lap.

At the end of the first day, the race was dominated by Prout, who had pulled out a lead of more than 13 minutes. Three Australian cars had come to race at Taupo, but by the end of the first day Prout’s car was the only one still in the mobile. Tom and Roly Dixon had a nightmare weekend, their Southern Cross Chev unlimited class car out of the event before it started with engine oil pressure problems, and the teams new Crumco VW Beetle V6 losing a rear wheel on the opening lap when the rear hub failed.

Ex-pat Kiwi Mike Hughes had a tense weekend. The resident of Florida, USA had computer problems in his massive Ford F150 desert truck and was only able to get out on the second day to run two laps of the days total 10.

At the end of the first day, Clive and Max Thornton could only wonder what might have been if they had not been forced to pit to fix their flat tyre in the early laps. They were second on elapsed time to Prout, 13: 43 seconds adrift. Fellow Bay off road racer Malcolm Langley was third, another 15 minutes back.

When the race restarted on Sunday to complete the final 500 kilometres, the 68 drivers able to re-start were once more racing at high speed on frozen roads, the temperature at the 8:04 am race start edging up from an overnight low of -9 to -2 degrees Celsius. In many places snow which had fallen mid-week was still on the ground at trackside.

Prout led off the front of the rolling start, chased by Thornton, Malcolm Langley, Colin Meredith and West Auckland team James Buchanan and Rick Sciarone in Buchanan’s fast Ryan Suzuki. Meredith had a frightening moment as the field headed into the forest, sliding straight on while braking for an intersection, but was soon back in the race.

Raana Horan was on a charge trying to make up for the time he had lost on the first day but had an almost insurmountable deficit to Prout, and was hoping to pressure the Australian into an error that would let him get past and start to cut back the time difference. The experienced Australian had several unlimited class cars between him and Horan and was allowing no such error.

But Prout was not to be denied. A faultless run in his big Jimco Chev single seater delivered the win to the Australian team despite the best efforts of Thornton, Langley, Rouse and others.

The Thornton challenge came to an end when Clive Thornton’s son Max crashed out over a three metre back; Malcolm Langley had been second overall for the two days and run as high as second but went out with a blown driveshaft.

Horan was unable to pare back the time lost on the first day, but put in a determined drive to get as close to the leaders as possible, finishing second on the road for the second day. Martin Gore had pushed through to be in the leading bunch on the second day, and finished third overall on the road.

Colin Meredith came home fourth on the day but second on overall time across the two days of competition, driving the car in which Clive Thornton won the race two years ago. He was more than 30 minutes behind the winner, with Horan third another four minutes back.

This year’s Asset Finance Taupo 1000 will screen on television in Australia and New Zealand. Local coverage of the race will screen free-to-air on TV3 with a race programme following the Hay Brothers production class team running on TV One’s Close Up current affairs program.