#2 ready for the Pines 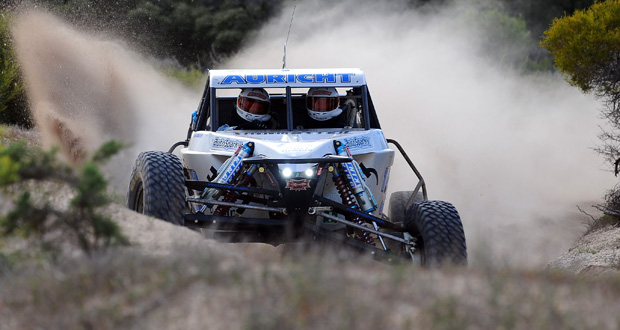 As the countdown towards the end of the 2011 Australian Off Road Championship draws closer, the True Build Racing team are putting all their efforts into the penultimate round, the Teagle Excavations ARB Pines Enduro, to be held on the logging tracks in the Tantanoola Forests next weekend.

The time leading up to the event has been a complete contrast to 2010, which saw the wettest conditions in the region for many years. Auricht and the True Build Racing team are in the hunt for Championship points, currently sitting on 25 Australian Off Road Championship points after their second outright finish at Round 3 in July.

“Our luck at the Pines hasn’t been that great, I have only finished one of the five times I have raced there” commented Auricht. “We have well and truly put the massive crash from last year, where we rolled end for end five times, behind us and are looking forward to racing again at the Pines.”

After a flat tyre at Hyden, a DNF at Finke and changing to a torque converter before Baroota, the True Build Racing team have had a tumultuous year. “We were really happy with the way the new torque converter configuration went at Baroota. Race time gained at Baroota, along with continued improvements to our already reliable package, we feel confident about the remainder of the season.”

Auricht and Connelly are second on the AORC leader board, 18 points behind current leader David Fellows and 5 points ahead of Greg Gartner and Greg Hicks, who are tied for equal third. “With a good finish at the Pines, the championship is certainly still within our reach” added Connelly.