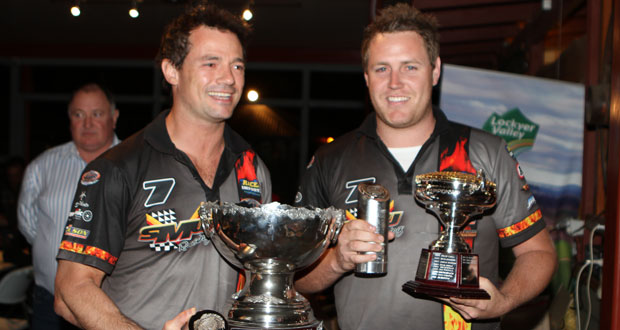 With the final Mitsubishi Electric Lockyer Valley 300 decided there was no happier team after the event than the SMU Racing team, securing the team their first outright Australian Off Road Championship with a second outright at the event.

For driver Matt Hanson it had been a long journey after winning the Super 1650 Australian Championship in 2006, and almost leaving the sport, as he battled in Pro class with a car that had well documented drive train issues for 4 years.

Late 2010 saw a change in personnel at SMU racing and a new car on order from Jimco through Cameron at Racer Imports. Three warm up races in 2011 including a win in the Tasmanian Sand Enduro to finish the year had the team optimistic for the upcoming 2012 AORC season.

A painful second outright by 17 seconds in the first round at Sea Lake after leading all day and confusion surrounding timing was followed by an electrical issue at Goondiwindi which saw the team lose an hour before hitting the track and finally ending up 14th outright. The team were back on track at Pines where they had their first outright win and going into the final round had to finish fourth or better to secure the Championship.

A second at Lockyer Valley meant that a consistent season was rewarded with the AUS 1 in 2013. Driver Matt Hanson reflected this week on winning the Championship, “It was a great result for the team in what has been a super consistent season. The car was in a winning position in all four races and a successful combination of car preparation by Shane and Tammi at Shane Cottee Desert Prep, a brilliant engine from Shane Wilson, efficient race day management in the pits by Daren Wells, Shane Cottee and Dad, ably managed by Glen Wells combined with some good cohesion in the cockpit with Leigh and myself has paid dividends.”

“Teamwork is what has won this Championship and it has been a fun year to be involved. We definitely have some improvement left in the car and we were in a position most of the year where we only pushed the car when we needed to depending on where others were on the track. Having some old off road heads in the team combined Leigh constantly telling me to go faster, really has helped us get to this position.”

“It has meant a lot to the team and gives us a real spring in our step heading into 2013. We will be taking the car down to the Portland sand dunes over the Christmas break where there will be the usual R&R and the Wells boys reliving off roading stories from the 50s, before we give the car a full prep for the 2013 season. Our first race will be the Portland Sand Enduro in February before commencing our 2013 season” said Matt.

Last but not least all of the SMU Racing Fans across Australia and abroad – thank you!

The SMU Racing team are commencing their search for Sponsors for the 2013 season. We offer a wide range of sponsorship options and available properties designed to give maximum exposure for our partners. If you would like to receive a proposal for the 2013 season drop Matt an email at matthanson@smuracing.com.au

You can check out the team’s website at www.smuracing.com.au, head to the team’s Face book page at Start Me Up Racing or check out all the team videos at SMU Racing AU on Youtube where you can catch up on all the latest stuff for SMU Racing. Check it out!