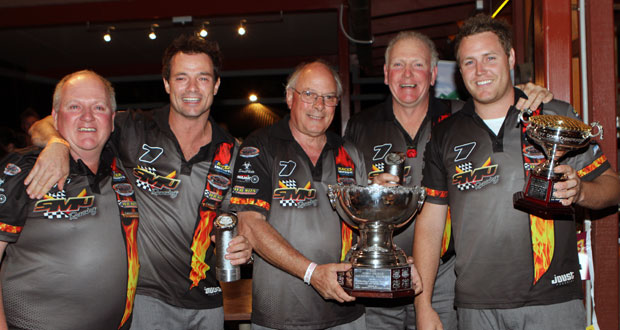 After 28 years of dedication and hard slog to motorsports best kept secret, off road racing, Matt Hanson has secured his first Australian Off Road Championship title and the right to wear the Aus #1 plate for 2013. 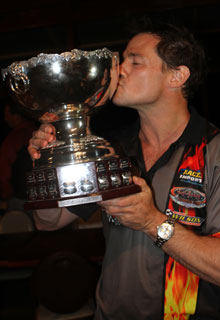 Hanson and navigator, come best mate, Leigh Wells were presented with their crowning glory at the Australian Off Road Championship awards presentation following the event awards at the Mitsubishi Electric Lockyer Valley 300. For the first time in off road racing history, the AORC Perpetual Cup made the trip from the CAMS Melbourne office to be presented to Hanson and Wells at the open air presentation at the Mulgowie Hotel, where the duo, along with the members of the SMU Racing team, celebrated the honor with their peers.

Along with presenting Hanson with the Aus #1 silverware, all the Australian Off Road Championship class champions were present to collect their awards. The speeches were priceless, some resulting in laughter and others in tears, as one by the champions conveyed their year’s journey culminating in the highest achievements the sport has to offer, crowned champions within their respective classes.

After the class presentations were complete, all eyes and ears turned to Matt Hanson and Leigh Wells as their year of ups and downs was recounted, first with Hanson’s heart felt speech and then with Wells.

Hanson spoke about how he loved the sport, but was at breaking point 18 months ago after prolonged problems with their racer and other personal issues, and ready to move on. He dedicated his Championship victory and his staying in the sport to two great mates, Glenn Owen and Cameron Ritchie. When Hanson was in turmoil and unsure of which direction to take, Glenn Owen put him in the driver’s seat of his new Jimco and, amid the adrenalin rush, the way forward came clear. Debuting his new SMU Jimco #7 in August 2011 Hanson, Wells and the newly badged SMU Racing team had found the reliability and consistency they were after. It was now time for their full on assault at the 2012 Australian Off Road Championship. 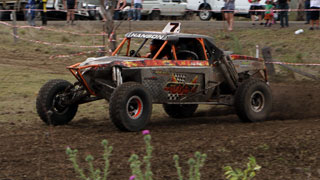 Leigh Wells’ speech was more light-hearted, although a tear jerker. He credited their win to the SMU Racing team headed by his Father and Uncle, Glenn and Daren Wells, Matt’s Father Neil Hanson and Shane Cottee and Tammy.

Leigh Wells commented later “now that the year is over, barely an hour goes by where I don’t reflect on what a great year it was for the whole SMU racing team. To win an Australian Championship is something I only dreamed about while following Dad and Uncle Daren around since I was a child. To win Aus #1 when the car and team is only 18 months old is an incredible achievement. The preparation of the car from Shane and Tammy from Shane Cottee Desert Prep is first class and the team can’t thank them enough. The engine from Shane Wilson Race Engines is a work of art – gives me whiplash every race – and Troy is a wizard with the things he can do with the car! To Dad and Daren, words can’t explain how appreciative I am for the guidance and support you have shown me and I know Poppy “H” would be proud. To Neil (the Godfather) thanks so much and it is a pleasure to have you there for the final word at every race. And finally to Matt, we did it Mate!! The time and effort we have put in paid off, and we knew we could do it with the belief from a great team around us and it’s something that will be with us forever. I regard you as a best mate and can’t wait to continue next year to defend the title. Thanks to everyone who helped out this year means a lot.” 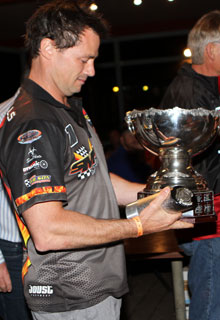 The SMU Racing teams rise to Australian #1 did not come easy. The team have been regulars on the Australian Off Road Championship circuit for near on ten years. Hanson drove to his first Australian Off Road Championship class title in 2006, taking home the bragging rights for Super 1650 class. They claimed their first AORC event victory after battling the Tantanoola Pines Forrest in the south east of South Australia at in September of this year at round three.

Their win at round three backed up their almost win, but settling for second outright, at round one. Electrical dramas at round two had them chasing the field for most of the weekend, with the second outright at the final round securing their Australian Off Road Championship aspirations.

The second generation racer has been donning a race suite since he was old enough to navigate at 12, slotting comfortably into the navigators seat for his father Neil 28 years ago. Neil, a true gentleman of the sport, is Matt’s greatest inspiration and supporter.

SMU navigator Leigh Wells, is no stranger himself to off road racing with his father Glen and Uncle Darren both renowned off road racers in their own right; the pedigree of this young navigator never in question. In his third season with the SMU Racing team, Wells is modest in his excitement about the team’s success and credits the experience of the team elders, Matt’s Father Neil and Glen and Darren Wells for the preparation and strategy back at SMU Racing Headquarter. 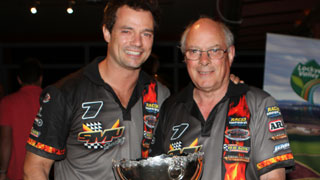 Daren Wells has never been short for a word and recalled his time with the SMU Racing team. “It all started about 18 months ago when Leigh said that I might get a call from Matt Hanson… Yes, I was intrigued. Matt rang and asked me to come over and have a talk about building a new car; a Jimco twin turbo AGB torque converter. He wanted to put together a team that had a lot of experience in offroading and, by surrounding himself with a good team of like-minded people, hopefully the results would come. Anyhow it’s all history now. We have great driver with plenty of experience coupled with a very keen navigator and great car preparation, excellent engines and with Glenn Wells as Team Manager, it all made my job easy as Pit Manager. Don’t forget Glenn knows how to win Australian Championships, from back when he was Team Manager for Yokohama Off Road team. The great part with this team was that everybody put in 100% effort for Matt and Leigh to win the Championship, and it gives all the members of SMU Aus #1 a great feeling. 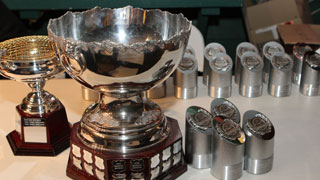 Glenn Wells backed up Daren and Leigh’s sentiments. “What a great year of offroading. To have the privilege to team manage this great group of people was rewarding, and, as it turned out, to secure the Australian Off Road Championship was outstanding. Matt and Leigh did a great job in the car while Shane and Tammy’s car preparation for each event was first class. The engine built by Shane Wilson preformed exceptional all year and the pit crew, led by my brother Daren with Neil Hanson, Shane Cottee and many helpers throughout the season was second to none. Troy was on top of any computer problems, data and electrical issues. In all, a great team performance and a job well done by all. Good times were had by all and that will never be forgotten. Roll on 2013 with more good times to come.

The victory writes Matt Hanson and Leigh Wells into the Australian Off Road Championship history books.