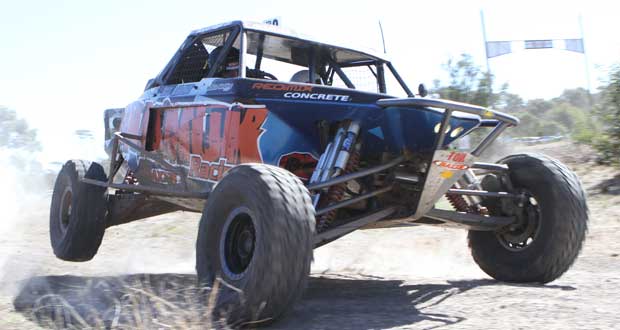 Bryce Chapman and Colin Hodge have capitalised on their ARB Top Ten Shoot Out success to take overnight honours at the Albins Off Road Gear Goondiwindi 400 after a gruelling 80 kilometre lap of the infamous melon hole course today. 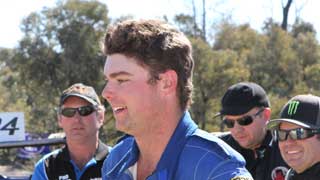 When asked how their first lap went, Bryce responded enthusiastically with awesome. They had a slight issue with the alternator light coming on. This didn’t affect their performance and they will change their alternator tonight as a precautionary measure.”

Chasing down Chapman for Sundays four laps, and looking for his second AORC victory for 2012, will be Prout Unicap Racings Brad Prout in the #9 Chevrolet V8 Jimco, only 23 seconds off the pace today. Prout commented after today’s racing that he was very impressed with his performance in Section 1. He has said that it was very difficult to judge the pace to race at, but his motor cross background has helped to navigate the rough terrain.”

Snapping at Prouts heels, only seven seconds behind, and widely acknowledging that Goondiwindi is one of his favourite tracks, is 2012 Tatts Finke Desert Race winners Brad Gallard and Scott Modistach in the Monster Energy Trophy Truck #454. 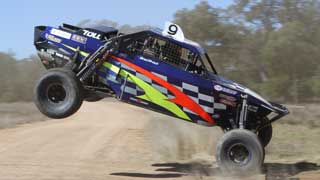 The Off Road Cartel’s Billy Geddes and Jamie Ward #441 have put in a mammoth performance driving the second of the Trophy Trucks #441 into fourth outright. Rounding out the top five and the first ProLite home was the Warrnambool based Matt Owen and Adam O’Connor only five seconds off the pace of Geddes.

57 of the 69 nominations finished the one 80km lap today with some notable dnfs. Action gets underway tomorrow at 8am when competitors will take to the track for four laps. Live coverage will be available via offroadracing.com.au.