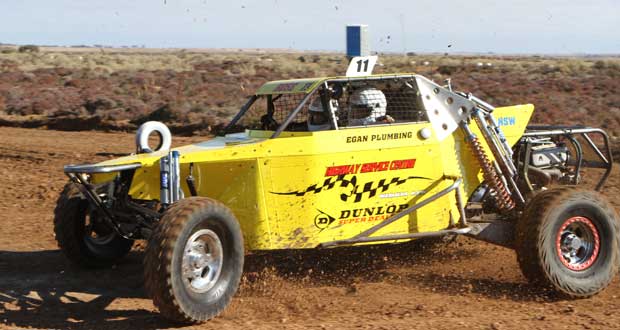 However, Terry and his team realise the fifth place finish achieved at the 2009 Goondiwindi event will not be an easy task to match with a high quality field nominated for this year’s event.

Warialda Off Road Club President and Terry’s son Howard has finalised his preparations and will be all guns blazing come Saturday morning. With power steering issues hampering his only start this season at his local Warialda race in March, Howard and navigator David Hartwig will definitely be a team to watch come Sunday afternoon, with his consistent lap times adding further calibre to the Rose Racing stables.

Former Warialda resident now Queensland based Darryl Ellison and his navigators Chloe Ellison and Toby Cooper will be looking for another strong showing in Goondiwindi. Round 1 was a success for Team Ellison, finishing full race distance, 11th in class and 24th outright, a great confidence booster for the remainder of the season. In another quality ProLite field, with many outright contenders, a good clean run to the finish will be high on Darryl’s priority list for this weekend.

Rose and Ellison Racing would like to wish all competitors, crews and committee a successful weekend in Goondiwindi. We do encourage everyone interested in offroadracing to head out to the track to experience some of the most exciting pieces of off-road race track on the planet, the Malpunyah Run, where the buggies and trucks dance past the crowd through the big melon holes and whoops with the throttle pined. So get on out to the Goondiwindi track this weekend and cheer and support for the Warialda teams, cars #11, #44 and #115 are the numbers to look out for on race day!!