Matt Hanson and Leigh Wells have notched up their first Australian Off Road Championship event victory of the year in the #Aus1 Snap SMU Jimco at the final round of the 2013 Championship, winning the TJM ProLocker Lockyer 300 in South East Queensland this afternoon.

Hanson built a huge 5 min 31 sec lead on Saturdays first section and while others charged, Hanson kept his cool to finish the 300km race in an overall time of 4hr 58min 53sec, to not only secure the win but also take third outright in the 2013 AORC. 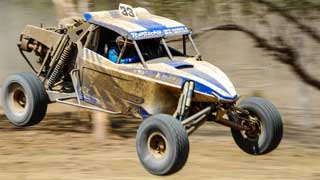 “We’ve had a really good run at the front of the field from the outset here at Lockyer Valley,” said Hanson. “To get the fastest time in prologue and then be able to capitalise on that is the ideal way to round out the year.”

Finishing second outright, 4min 54sec behind Hanson was Shannon and Ian Rentsch in the #33 SR Racing Jimco. With the championship at stake Rentsch took a conservative approach on Saturday, before opening the taps on the tight and technical course on Sunday to not only leap into second outright but nail down his sixth Australian Off Road Championship title.

“To win a sixth Championship means a lot to all of us. It definitely has been one of our better years. We have been really consistent, and the lowest position we’ve finished is second, so we’ve got to be really happy with that,” said Rentsch.

Third outright was the Queensland based team of Ryan Taylor and Josh Curran in the #24 Uni-Industries. Plagued with brake gremlins throughout the event, Taylor drew on his experience to thread the V8 through the trees to maintain his place on the podium.

The final round of the Australian Off Road Championship, the TJM PRO LOCKER- LOCKYER 300 was held in and around the picturesque valley and foothills of the Mulgowie area in Queensland. Nestled between the two major regional centres of Ipswich and Toowoomba, Mulgowie is an hour drive from the Brisbane CBD and outer Gold Coast areas.