Hanson Finishes On A High

The TJM Pro Locker – Lockyer 300 has been run and won with Matt Hanson and Leigh Wells ending their Championship year on a high note. The Snap SMU Racing team led from the get go, taking pole position from prologue and building up over a 5 minute buffer at the end of Saturday’s racing. 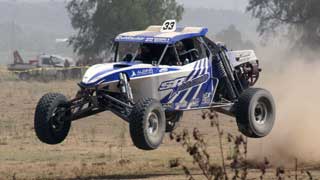 Hanson and Wells started today’s section two off pole but were unable to capitalise on the dust free run to score third berth for the final section. The Snap SMU Racing Jimco #1 maintained its lap times to take first outright honours at the TJM Pro Locker – Lockyer 300.

Shannon and Ian Rentsch have sealed their right to don the Aus #1 plate for 2014 on the SR Racing Jimco and have taken second outright this weekend after pulling out all the stops on the last two laps to move through the field from fourth to second outright.