OBR Number One at Coffs 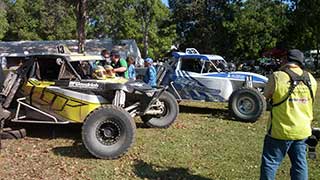 Travis Robinson and Paul Currie survived the gruelling dusty conditions to claim the inaugural outright victory for the Western Australian based family team.

Shannon and Ian Rentsch #33 fought hard, ultimately claiming second outright, 32 seconds behind Robinson after over 400km of off road racing.

Jared Melville and Kurt March #79 led the field for most of the day, surrendering their lead when they pitted to change a flat tyre.

Of the 32 nominations, 17 crews started the third section of racing this afternoon.