The SNAP SMU Racing team have blitzed the prologue field at the Coates Hire Rally Australia Off Road event, round four of the Australian Off Road Championship 60km north of Coffs Harbour on the New South Wales coast. 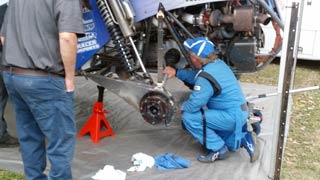 The Nail It Racing team’s #79 with Jared Melville and Kurt March in charge rounded out the prologue podium, finishing the 11km track in 10:32.328.

25 of the 32 nominations completed the prologue.

Current AORC points leaders Shannon and Ian Rentsch clipped a tree in the #33 SR Racing Jimco, the team cautiously limping back to the pits. Latest report is that the Jimco sustained minor damage and has applied for seeding in the field for section one.

The seven teams that failed to finish prologue have all applied to be seeded in to the start order for today’s section one of two laps of the 52km course.