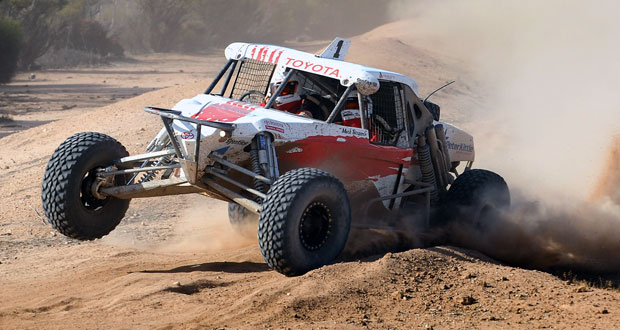 Reigning Australian Off Road Champions David Fellows and Mark Bergamin (#1) picked up where they left off at the end of 2010, winning their second consecutive ARB Pinjarra Engineering Hyden 450 in a time of 4 hours 40min 14.72 seconds. Held over the Easter long weekend in the wind swept wheat fields of Hyden, Western Australia, the race was the first round of the season and Fellows win gives him a head start in the race for the 2011 Australian Off Road Championship.

After securing pole position on Saturday, Fellows surrendered the lead on the first lap of Sundays race to West Australian pilot, Travis Robinson, who looked on track to claim his first AORC win. However, on the final lap of the day, luck deserted Robinson, who was sidelined with a broken axle, handing the lead and ultimately the ARB Pinjarra Engineering Hyden 450 win to Fellows in the #1 Peter Kittle Motor Sports Jimco. 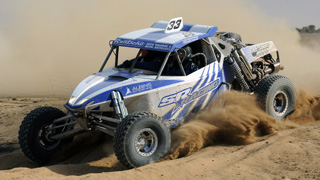 Shannon and Ian Rentsch (#33) charged through the field to claim second outright in a time of 04:45:52.86, finishing just 5min 38.14sec behind Fellows in the twin turbo Nissan V6 SR Racing Jimco. The son and father team started in 11th position after a brake failure during the prologue forced them to be seeded into the start order.

Third outright was the single seat Prout UniCap Racing Jimco of Sydney’s Brad Prout (#3), who kept the pressure on the leaders with his Chevy small block powered Pro Class Buggy.

Dan Auricht and Grant Connelly (#2) showed they were once again championship contenders, but were forced to settle for fourth outright in their mid-engined V8 True Build Racing Jimco, after a flat tyre early in the race took its toll on their podium aspirations. 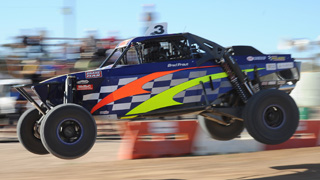 The Aussie built Razorback of the Aaron James and Brett Plant (#128), locked in fifth outright and the ProLite class win. The Mildura based Jamesprint Motorsports team put in a flawless performance and once again showed a naturally aspirated V6 can mix it with the twin turbo and V8 powered machinery. Snapping at his heels was Wes Cowie and Travis Milburn (#124), who were lucky to bring their Revtech Motorsport ProLite Jimco home in sixth outright, after a roll during the freak deluge of rain that hit Smithy’s Place in the closing stages of the race.

Andrew and Matthew Kittle (#14) brought the second of the Peter Kittle Motor Sports Jimco’s home in seventh, ahead of the ProLite G&T Racing Mirage of Tony Fehlaber and Gary Howell (#138).

Les Marshall and Glennys Rose (#105) rounded out the top ten in their ProLite Jimco, ahead of the first local finisher Brad Mudge and Brett Beaton in 11th.

The Australian Off Road Championship now heads to Alice Springs for round two of the five round championship, with the red centre hosting the Tattersall’s Finke Desert Race on the Queen’s Birthday Long Weekend, June 10th to 13th.