Home / New new new / Fellows Back to Back Hyden Victory

Fellows Back to Back Hyden Victory 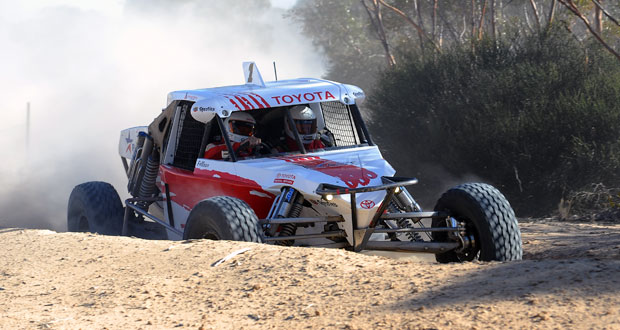 The Peter Kittle Motor Sports Toyota V6 powered Jimco Pro buggy was driven in top form by David Fellows and Mark Bergamin to outright victory at the ARB Pinjarra Engineering Hyden 450, Round 1 of the 2011 Australian Off Road Championship, held in the Western Australian tourist region of Wave Rock.

Starting off pole position after blitzing the field in the Top Ten Shoot Out yesterday, Fellows lost track position on lap one to the Outer Bounds Racing Jimco of Travis Robinson and Paul Currie (13) after a small mistake that let the Robinson crew through. The Robinson Jimco was on top of the leader board at the completion of the two laps that made up the first section. Rounding out the podium for Section 1 was the second Jimco from the Outer Bounds Racing stable of Beau Robinson and Adam Trewhella (85).

Section 2 commenced at 2:30pm with one minute intervals, after the field had been placed in Parc Ferme post their one hour service break. The field was led out on Section 2 through Smithy’s Place for another two of the 112km laps by the #13 OBR Jimco of Travis Robinson; the Jimco succumbing to Axle failure on Lap 2. The Outer Bounds Racing team were totally out of luck for today’s competition with #85 Jimco retiring on lap 1 with alternator failure, a disappointing finish for the immaculately prepared and presented team cars.

With the two OBR Pro buggies out of the results, the chase was on for the prized podium positions and the points haul that goes with an outright finish. David Fellows and Mark Bergamin (1) not wanting to relinquish their hard fought lead, the current Australian Off Road Champions and the 2010 ARB Hyden Pinjarra Engineering 450 winners continued to push the Peter Kittle Motor Sports Toyota V6 powered Jimco hard and greeted the checkered flag with a five and a half minute lead over second place.

To add another angle to an already drama packed event, as Fellows and Bergamin were given the checkered flag, the heavens opened up and dumped a couple of millimetres of much needed rain over Smithy’s Place as a result of a passing thunderstorm downpour, the ensuing finishers were wet to the core as they completed the event. Prior to this competitors had endured hot, windy and very dusty conditions.

Five times Australian Off Road Champions Shannon and Ian Rentsch (33) in the SR Racing Jimco crossed the wet slippery finish line in second outright, securing 15 championship points in their campaign for a sixth crown. A further four minutes behind on time was the Prout Unicap Racing Jimco of Brad Prout (3) adding 12 points to his championship hunt.

Dan Auricht and Grant Connelly (2) in the True Build Construction Jimco Pro buggy finished the event in fourth place after recovering well from a flat tyre that had dropped them to tenth after Section 1.

The now popular ProLite buggy class featured strongly at this event with four of their number finishing in the top ten. Those being Aaron James and Brett Plant (128) in their Razorback, Wes Cowie and Travis Milburn (124) in the Revtech Jimco, Tony Fehlhaber and Gary Howell (138) and Les Marshall and Glennys Rose (105) in their Jimco.

The attrition rate for the first round of the Australian Off Road Championship was high with 18 vehicle completing full distance of the 64 competitors who started the event.

The next round of the Australian Off Road Championship, the Tattersall’s Finke Desert Race, will be held on the Queen’s Birthday June long weekend in Alice Springs.