Fellows On Time at Baroota 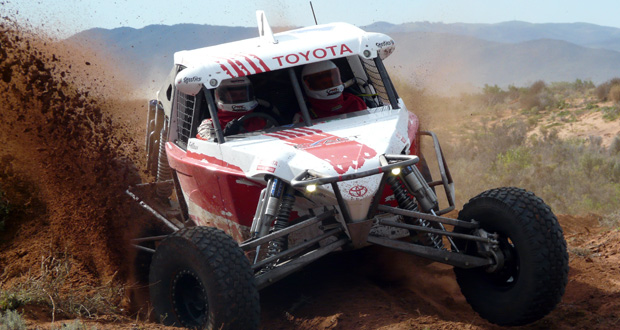 Section 1 got underway at 1:30pm central time after the Top 10 Shoot Out at noon.  The Top 10 had a dramatic affect on the start order with the current Australian Off Road Champions, Dave Fellows and Mark Bergamin, relegated from second to eighth on the start grid after a mishap in the Shoot Out.

True Build Racing teams Dan Auricht and Grant Connelly led on the road from start to finish for Section 1, only to be pipped at the post by Fellows and Bergamin on outright time by 40 seconds.  The Peter Kittle Motor Sports team forged through the field to make up valuable time, realising that they didn’t need to finish first on the road to take pole position for Sundays Section 2 start.

Second on the road and moving down to third outright was the Outer Bounds Racing #13 Jimco of Travis Robinson and Paul Currie, 57 seconds behind Auricht on outright time.  Buddy and Kerry Crowe in the Runamuk #4 Jimco have backed up their recent fifth outright finish at the Tattersall’s Finke Desert Race with a fourth for Section 1 today; the team aiming for a the podium finish that has alluded them to date. 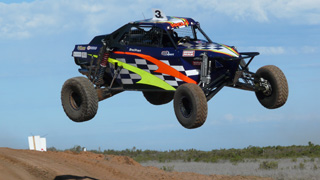 Fifth outright and needing a goods points haul for this event was Brad Prout in the Prout Unicap Racing #3 Jimco.  Prout, unable to compete at round 2 due to family commitments, needs a good finish to keep him in the hunt for the championship.

28 of the 42 starters completed the two 65km laps today, with notable DNFs going to Mark Burrows and Colin Hodge in the #21 MBR Jimco, out of the event with gearbox failure. Danny Brown and George Apted broke an axle in the Monster Extreme 2WD #442, the team hoping to do repairs overnight and have applied to be seeded into the Section 2 start order.

The start order for Section 2 will be the outright time finish order of Section 1.  Andrew Pinto and Nicholas Reuther in the GGS Glass #5 Jimco had engine and turbo problems, ending their Baroota outing.  Baroota property owner and event organiser Hayden Bentley suffered with reported electrical dramas and was towed back to the pits, but is reported as applying for seeding for tomorrows start order.

Glenn Owen and Deon Beattie, another team to put down a quick prologue time in the #30 Owen Trusses Jimco, were out of todays racing with reported computer problems,  but have applied to be seeded into the Section 2 start order. The 401 Mickey Thomson entry of Chris Western and Stewie Bishop completed one lap today, out of today’s racing with suspension failure. 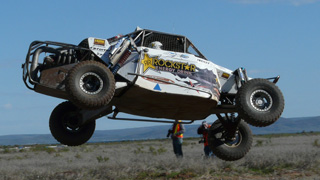 Neville Taylor and and Shannyn Fitzgerald in the Rockstar #6 Jimco were another team to be caught out by the legend of the Baroota track, suffering a gentle roll over, returning to the pits and resuming the race.  However, their allowed running time ran out, meaning the team could only complete one lap.

Section 2 gets underway at 9am tomorrow with competitors tackling the 65km track for three laps, stopping for an hour break, followed by a further two laps.  Further Supplementary Regulations were issued to competitors at the event notifying them of the change in section numbers and format.