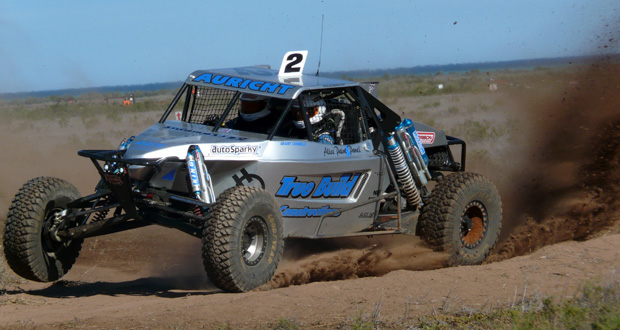 In an action packed Top 10 Shoot Out at the Flinders 450, all bar one team improved on their original prologue time. 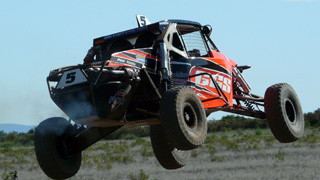 Second on the start grid will be Andrew Pinto and Nicholas Reuther in the #5 Jimco, knocking nine seconds off their prologue time to start 30 seconds behind Auricht for race start.

The Perth based Outer Bounds Racing of Travis Robinson and Paul Currie #13 have foregone two start positions in the Top 10, even though they bettered their original prologue time by two seconds.

Property owner Hayden Bentley has moved up one position, slotting into fourth and five seconds under his prologue time. Maintaining their fifth position was Glenn Owen and Deon Beattie in the #30 Owen Trusses Jimco while also knocking five seconds off their original time.

Danny Brown and George Apted have monstered their Monster Energy #442 CPS Trophy Truck into sixth from original seventh, also putting down a nine second better time. Buddy and Kerry Crowe have moved up a position into seven with the Runamuk Jimco crossing the timing marker 9 seconds quicker than their first attempt.

Dave Fellows and Mark Bergamin lost 11 seconds in their Top 10 Shoot Out, dropping them from second to eighth for Section 1 start this afternoon. The team saying on their Facebook page “After a mishap in the Top 10 shootout … ”

Wally Francombe and Naomi Ridley in the second outing of the Rids Race Frame #42 Pro buggy have moved into ninth outright and 11 seconds quicker than previous on the 8km course.

Engine dramas struck the EVO3 Superboot RV2 of Travis Milburn and Rob Cowie, with the #25 failing to finish the Top 10 and unable to make the start of the first section. The Revtech Motorsports team are trying to source a replacement engine to enable them to return to the field for Sunday’s Section 2.

Shoot out results can be found here