The best off road racers Australian can assemble have converged on the small farming community of Baroota this weekend for Round 3 of the Australian Off Road Championship. First on today’s schedule of events was the all-important prologue to determine the start positions for Section 1. The Top 10 qualifiers from the prologue also have the chance to better their times by re-running the 8km track in the Top 10 Shoot Out.

Travis Robinson and Paul Currie in the #13 Outer Bounds Racing Jimco have proven that their team’s strategy to concentrate on one car at this event was the right step with team putting down a winning prologue time of 5:27.77.

Glenn Owen and Deon Beattie have driven their Jimco into fifth in a time of 5:36.86 with Baroota property owner Hayden Bentley in his single seater #18 Racer Pro buggy in sixth. A mammoth effort from Danny Brown and George Apted to take the CPS Trophy Truck Extreme 2WD into seventh in a time of 5:44.80. 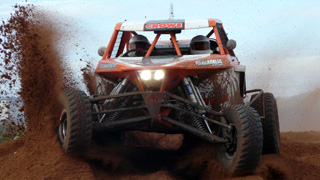 The Runamuk Racing team have only got championship points on their minds this weekend, Buddy and Kerry Crowe living up to that philosophy, prologuing in eighth outright in a time of 5:46.02. South Australian racers Travis Milburn and Rob Cowie in the Revtech Motorsports EVO3 are showing what they’re capable of, mixing it with the big guns and taking ninth – 5:48.33. Rounding out the top ten was the father and daughter team of Wally and Maree Francombe in the second ever outing of their new Rids Race Frames Pro buggy #43 in 5:51.08.

A noteably 11th outright went to Brad Prout in the #3 Unicap Jimco.  Prout hit a jump hard towards the end of the prologue, upsetting the landing and sending him off the track the wrong side of a marker.  After turning around and going the correct side of the marker, Prout lost a swag of time and could have been a potential top three finisher.

The Top 10 Shoot out is scheduled to get underway at noon with the results affecting the start order for Section 1.

Official Results can be found here