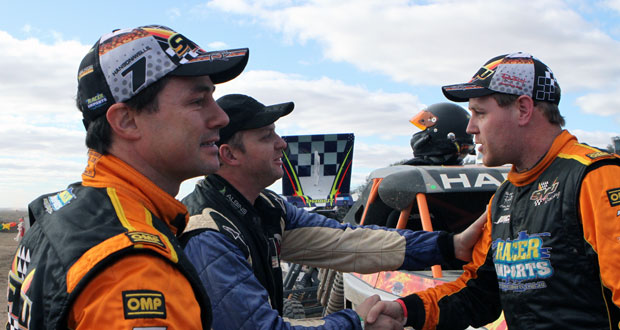 The first round of the 2012 Australian Off Road Championship has been run and won in the Victoria Mallee Region, the MBL Sea Lake Mallee Rally. The final result came down to a 17 second margin and revealed the true sportsmanship side of off road racing.

Matt Hanson and Leigh Wells were first on the track to cross the finish line in the #7 SMU Racing Jimco, however, on adjusted time, the win was awarded to Brad Prout and the Prout Unicap #9 Jimco. Prout was compensated for time lost when he stopped trackside to assist fellow competitor Aaron Haby’s #57, when his buggy caught fire.

Unfortunately for Hanson he was unaware that Prout was due the two minute compensation and backed off on the last lap. 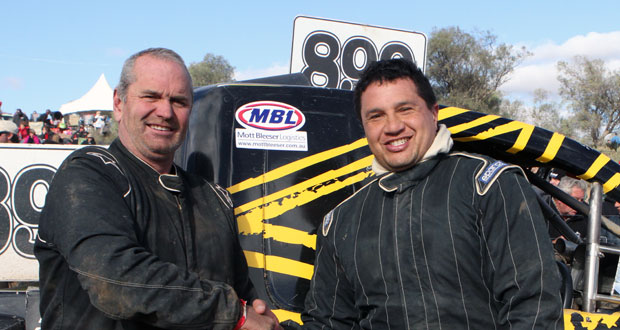 The third outright podium position and first in ProLite class went to the #178 Jimco of Lindsay Foster and James Lochert. Foster clocked up consistent lap times for the five lap event, narrowly edging out the New Zealand entry of Raana Horan and Michael Connor by 28 seconds. Horan plans to contest all rounds of the 2012 Australian Off Road Championship and has banked a first in class for his first race on Australian soil. The crew removed the front drive shaft from the #899 beast in the second service break as they kept breaking right hand from CV’s.

Fifth, and the second of the ProLites home, were #131 Andrew McClelland and Murray Mott only 46 seconds behind Horan. ProLite class seemed to be the order of the day with seven out of the top 14 finishers from the class. Chris Western and Stewy Bishop have banked maximum class points for their 2012 campaign securing first in class and sixth outright while Rob Cowie won the family honours battle driving the #192 machine into seventh outright and third in ProLite class; brother Wes and Father Bill finishing in 12th outright in the #102 Move Yourself Trailer Hire Jimco.

Tony Fehlhaber and Gary Howell in the second drive of his recently acquired ex Rentsch AORC winning Chenowth, just missed out on a class placing, finishing 18 seconds behind Rob Cowie.

The ProLites continue to attack the finish line with Andy Ryan and Justin Watt racing the Saber #113 into ninth outright with the #11 Jimco V6 Honda of Terry Rose and Shane Eagan the Pro buggy in the ProLite sandwich, finishing tenth outright and ten seconds ahead of the #151 Chenowth of the husband and wife Erceg Motorsports team of Luke and Vicky Erceg.

Clayton Chapman and Adam McQuire flew the flag for the Chapman Off Road Team driving the Pajero #803 into 13th outright and second in class. Team owner Rob Chapman with Ross Challacombe in the navigator’s seat also took home class silverware, finishing top of the Production 4WD class in the #703 Triton.

The Super 1650 Australian title defence for Darryl Smith and Michael Matthews is going to plan, banking maximum class points in the #201 Alumicraft. The team not completely happy with their preparation after a failed fuel pump ended their testing weekend at the recent Richard Bennet Memorial Enduro.

111 competitors were scheduled to front the green start light for Sunday’s 5 laps race however three failed to show leaving 108 to battle it out around the picturesque Lake Tyrrell. 36 teams finished the full race distance of five laps, with a further 16 crews completing the four laps required for the Victorian Off Road Championship section.

The MBL Sea Lake Mallee Rally track is one of the most picturesque off road race track in Australia. Weaving its way around Lake Tyrrell, competitors had a large variety of terrains and obstacles to deal with, some finding their way into the murky muddy bogs.

Round 2 of the Australian Off Road Championship will be held in the Queensland south at Goondiwindi on 4-5 August.