Four Down, One To Go… 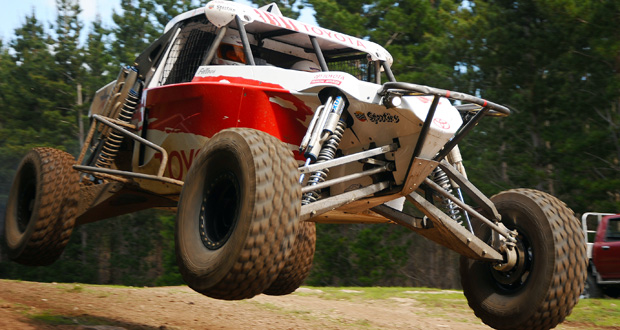 A cool and calculated race plan paid dividends for Peter Kittle Motor Sports at the Teagle Excavations ARB Pines Enduro held at Millicent on the weekend. With David Fellows and Mark Bergamin taking the #1 Jimco to victory and stamping their authority on the Australian Off Road Championship.Sitting in fifth place after the prologue in Teagles Quarry on Saturday afternoon, Fellows wound up the wick in the Top Ten Shootout. Shaving almost six seconds off his initial run, an effort which saw him take pole position and set up a drag race with Mark Burrows from the start line on Sunday morning.

When the lights went green for the six lap race through the tall pines, Burrows got out of the blocks first.

“Once Mark got the jump I let him go” said Fellows “the pine breaks were very slippery in the morning so it was much better following a car to work out where the greasy spots were.”

By the end of the first lap Fellows had stepped into first on the road and while Matt Hanson was ahead on time, the team had the championship firmly in mind and were keeping an eye on Auricht’s progress as they charged through the forest.

“The track was greasy to start with then dried out and became dusty on the straights as the day progressed. It chopped up on the last two laps, but that’s the Pines and to be expected. After laps four and five it always gets rough and hard on the body.”

Heading into the final two lap section, Fellows took the race lead after Matt Hanson’s retirement. Finishing the Teagle Excavations ARB Pines Enduro in a total time of 3hrs 49min 49.73sec, ahead of Aaron Haby in second and the Auricht/Connelly team in third.

“It was a good race today with a quality field of cars and drivers. The Haby brothers were very impressive and good to watch, and will be something to be reckoned with in the future.”

“They have done an awesome job with the arena. If it had rained I don’t think it would have worried us too much. They have put on a good event and the weather couldn’t have been better, so it was a perfect weekend” said David Fellows.

“We went to the Pines with the championship in mind were really happy with the result at the Teagle Excavations ARB Pines Enduro, you can’t do any better than that” said team owner Peter Kittle. “We’ll do our sums carefully before Goondiwindi, but we can possibly finish as low as fifth and still win the championship. The win this weekend has given us a bit of breathing space.”

“The car ran faultlessly all weekend and Dave still had a little up his sleeve if he needed it. The team will now pull it apart and prepare it and hopefully have a similar result at Gundy.”

Even though the Fellows and Bergamin head into the Albins Off Road Gear Goondiwindi 400 with a 23 point margin over Auricht and Connelly, they will attack the event with the same positive approach used all season.

“As with any off road race you need to finish, so we’ll be going there with a definite plan. We won’t be going there just to putt around, that’s when things go wrong. We’ll go there with the intention of being in the top three and see what happens from there” said Peter Kittle.