Full Steam Ahead For Fellows

Full Steam Ahead For Fellows

Peter Kittle Motor Sport are looking forward to the fresh, new challenge the Bentley’s Cabin Park Flinders 450 will present when they unleash Dave Fellows and Mark Bergamin in the #1 Jimco at Baroota this coming weekend. The event will be the third round of the 2011 Australian Off Road Championship and Fellows heads into the event with a three point lead over Tattersall’s Finke Desert Race winners Greg Gartner and Jamie Jennings.

“It’s full steam ahead for the championship” said team owner, Peter Kittle “we want to retain that number one position.”

“We were happy with the cars after Finke and our team manager, Rob Richardson, has just been putting the finishing touches on Dave’s Jimco in our Adelaide workshop.”

It is the first time Fellows will have driven at Baroota since teaming with Peter Kittle Motor Sport, but they are confident Fellows will be able to draw on his wealth of experience to adapt quickly to the conditions.

“Dave has just had two weeks overseas and we expect him to come back faster than ever. We’re looking forward to the fresh new challenge” he continued. “We are concerned it may be a bit dusty with the 65km laps, but it will be the same conditions for everyone.” 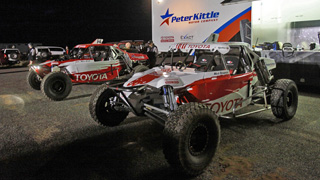 Fellows #1 Jimco will be the sole entrant for the team with Andrew and Matthew Kittle foregoing contesting the remainder of the 2011 AORC season in the #14 Jimco. Andrew needs to focus on his new promotion within the Peter Kittle Toyota Group, as Manager of the Toyota Sales Department in Alice Springs.

However, they will be pulling the helmet on to race the #14 Jimco with Dave Fellows at the Sporties 12 Hour Enduro in Alice Springs the following weekend, and the team also plans to take the car to the Kickstarter’s Gascoyne Dash at the end of the season.

Looking ahead to the 2012 season, Peter Kittle announced they will have an exciting new weapon as part of their armoury.

“Next year Dave Fellows will be changing over to our new Jimco truck, which is currently being built.”

“Rob Richardson has been in the States working on it with Jimco. It is a smaller truck than what Jimco normally produces, and is only slightly larger than our current buggies and not much heavier. It will be featuring our race proven Toyota engine package, matched to a 4 speed sequential manual gearbox.”

Racing commences at Round 3 of the Australian Off Road Championship on Saturday July 23rd with the prologue at 10am. With two days of racing in store, make sure you are trackside to see the team take on the famous berms and caverns for which Baroota is renowned.