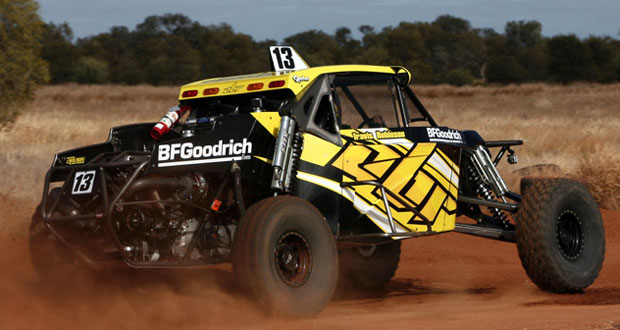 Round 3 of the Australian Off Road Championship will be on fresh ground come July 22-24th. The Bentley’s Cabin Park Flinders 450 is run on land owned by regular AORC competitor Hayden Bentley. One of the teams working hard to take outright honours at the inaugural event is West Australian based team Outer Bounds Racing. 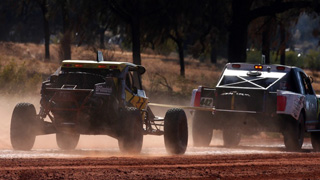 With the disappointment of the Tattersall’s Finke Desert Race fresh in their minds, OBR duo Travis Robinson and Paul Currie are determined to see Round 3 of the AORC through to the chequered flag.

“We had a pretty good run down to Finke on day 1” said Travis. “As with every time Paul and I climb out of the car, we had a few improvements we wanted to make for the run home. We changed the suspension set-up a little, to try to give the car more stability over the rougher return leg. With a host of trucks breathing down our necks, Murray and the boys serviced and double checked everything on the car to keep us out front and to keep the buggy flag flapping. Unfortunately, the transmission had other ideas.”

After setting the fastest ever time down to Finke, the Lucky 13 navigator Paul Currie was philosophical in his post-race analysis “both OBR cars are fast, there’s no doubt. Usually we focus on creating advantage through each corner and through each small section of track. We need to take a broader view of the event and try to drive a whole, seamless race” reflected Paul.

Despite a horror run of devastating DNFs the OBR team are maintaining a good, positive outlook. “The guys have had a series of team days at the OBR workshop over the last couple of weeks and the work rate and team spirit is as high as ever” said Brian Robinson. “The constant encouragement from our supporters and sponsors coming in and out of the workshop in between races just serves to focus the boys on achieving that first win. If we can hold off the rest of the hard chargers and notch up that first win at Baroota, it blows the championship wide open and once the boys have that DNF monkey off their back, look out!”

This weekend will see just one OBR car entered with the #85 crew turning their hands to servicing the #13 car. Just another small measure in making sure that the #13 OBR car is on top come the chequered flag. 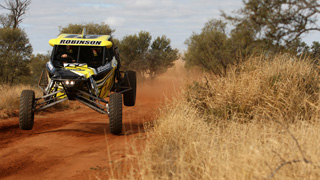 “We have to put the past behind us, realise we have a very fast package, talented team and good set-up and just look forward to the new era of finishing races” stated Beau. “We have put a huge amount of time and effort into this event, we have done literally everything we can to make sure Travis and Paul have the best possible package underneath them. By only entering one car I believe we will have a better chance of keeping our finger on the pulse and hopefully have a heap of fun doing so.”

The OBR team is looking forward to racing on the wide ranging conditions at the Flinders 450. “After Griffith dropped round 3, the Bentley family have spent a great deal of time and effort into making sure that Round 3 of the AORC goes ahead successfully.”

Event scrutiny and reconnaissance will take place on Friday 22 July, before the cars hit the track on Saturday morning for the prologue. The main event will consist of seven laps of the 65km course, with Section 1 consisting on two laps on Saturday afternoon, followed by Sections 2 and 3 on Sunday.

OBR fans can visit www.outerboundsracing.com.au to follow the Outer Bounds Racing Team’s progress before, during and after the race with live reports and photos coming in from the track. Fans can also follow the team’s progress on Facebook by clicking on the “Become a Fan” tab on the Facebook page.

Also watch out for OBR’s Video series which will have coverage from each Event on the Official YouTube page at http://www.youtube.com/obr184 or follow the links on the OBR website.