Hanson Strikes At The Pines 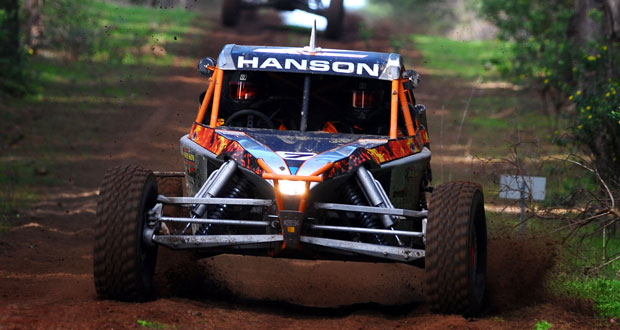 Matt Hanson and Leigh Wells have stormed home to take their maiden AORC round victory at the Teagle Excavations ARB Pines Enduro held in Millicent, South Australia, on the weekend. Hanson recovered from a roll over in the #7 SMU Jimco during Saturday afternoons top ten shoot out, to take charge of the six lap race through the Tantanoola Pine Forest early on Sunday morning. With conditions perfect for racing, Hanson and Wells unleashed the power of their twin turbo powered V6 Jimco on the forest, to greet the chequered flag in a time of 3 hours 35min and 36 seconds to win the 390km long, Teagle Excavations ARB Pines Enduro.

“After the drama of Sea Lake where we initially thought we had won and ended up second and the problems at Gundy, to actually win one was great. The car ran faultlessly this weekend and we are really pumped. I’ve been racing since I was 12 years old and as a kid I’ve dreamt of winning one and to do it on what I would consider my home track it is awesome” said Hanson at the finish line.

Matt Coleman and Shawn Teagle brought their class leading Tatt’s Finke Desert Race form to the Pines, putting in a rock solid performance to finish second outright in the #55 V8 powered Alpha, six minutes behind Hanson. Third outright was the #21 twin turbo V6 Jimco of Mark Burrows, who had a new navigator, Sean Ratcliffe alongside for round 3 of the championship. Burrows started on the front row of the grid, next to Garry Turnbull on Sunday morning, however brake issues forced him into the pits at the end of the first lap. He rejoined the race in 42nd place on the road and over the next five laps Burrows charged through the field to lock in the final podium position.

Attrition once again played its hand with twenty seven of the seventy-five starters completing all six laps of the Teagle Excavations ARB Pines Enduro. Gary Turnbull who started on the front row of the grid next to Mark Burrows retired with brake problems, while Aaron Haby who went toe to toe with Hanson for the outright lead for the first four laps of the race exited with engine dramas.

Hanson’s win puts him at the top of the leaderboard heading into the final round of the 2012 Australian Off Road Championship, the Lockyer Valley 300 held in South East Queensland on the 9th – 11th November.