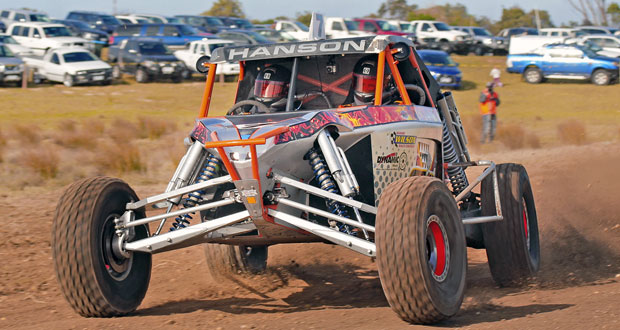 After a tough weekend, the SMU Racing team have thoroughly enjoyed their maiden victory at the Teagle Excavations ARB Pines Enduro at Millicent.

However the weekend started off on an indifferent note for the SMU Racing team when the car rolled in the Top Ten Shoot Out and not the ideal start the team had hoped for.

Driver Matt Hanson, unfazed with the Shoot Out result, added, “our aim in the Prologue was to land in the Top Ten, and have a real go in the Shoot Out. We were having a super lap in the Shoot Out before the last corner when we just clipped a tyre and a large rock under the surface tipped us over. Not great, but a soft roll over which put us into ninth position for the start of the following day.”

“Some great teamwork by the SMU Crew on Saturday to get the car on the track for the following day’s racing occurred which was an amazing effort by the team,” commented Hanson. 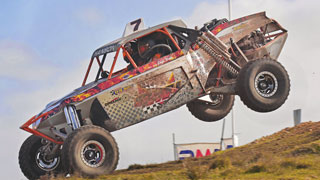 After some deep thinking at SMU Racing engine developer Shane Wilson’s house on Saturday evening followed by some encouraging words in the SMU team’s ears at night’s end by Glenn Owen, Matt Hanson and Leigh Wells came to play Sunday morning. The team set off from ninth position at race start and came in at the end of lap one first on the road – a terrific effort. Only one small issue with the car stalling under brakes with resultant loss of steering which was fixed at the end of lap two in the Pit break before heading off again.

After the first heat, a Battle Royale was under way with the #7 Jimco and the single seater of Aaron Haby. Fast lap times and the two cars swapping lead on numerous occasions followed. The SMU Racing car always having a 20 -30 second buffer due to Haby starting the day off the grid just in front of Hanson and Wells, “it was unbelievable racing with Aaron and some of the best wheel to wheel racing we have had. There was a great respect out there from both teams and I think this competition forced us both to open out a lead on the rest of the field,” said Hanson.

The final heat started in much the way the last two heats had finished with Hanson three seconds on the road behind Haby. However the battle had unfortunately taken its toll on the #57 vehicle with an engine problem not far into the fifth lap. The SMU Racing team assessed the situation and backed off the pace for the final two laps finishing the event just over 6 minutes ahead of Matt Coleman and Sean Teagle in the #55 Alpha. 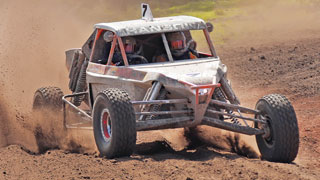 “It was a great weekend for SMU Racing and has given the team their first victory that had eluded us in the first two AORC rounds,” said Team Manager Glenn Wells. “The car ran faultlessly all weekend and other then the slight mishap on Saturday we could not be happier with the result. Going into the final, all important, AORC round at Gatton it was the result we were after to give us the best possible run at Championship points at the pointy end of the season’” added Wells.

SMU Racing heads to the final round full of hope that they can finish the event and hopefully have a successful ending to the 2012 AORC season.

Keep up to date with all the team happenings at www.smuracing.com.au or give us the big thumbs up on our face Book Page and help us get to our aim of over 500 friends.