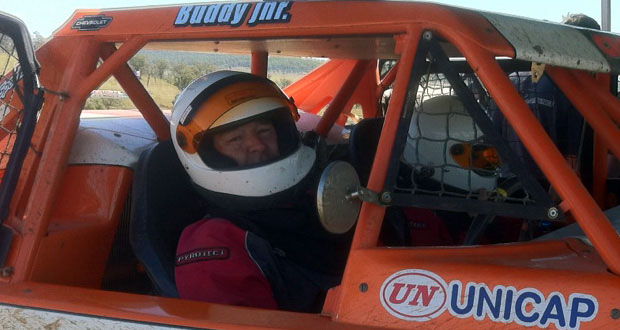 The Runamuk Racing team have once again reigned supreme at Hunter Rivmasta Offroad Warialda 200 taking the top two placings on the podium. In a twist of fate, the stable mates finished in reverse order to 2010, with Buddy and Kerry Crowe driving the #4 Jimco Champion from first in prologue; to first at the overnight break; to first outright at the end of the weekends racing.Last year’s Warialda winners, Bruce Chapman and Peter Vail chased hard, taking second in a three way podium battle in the teams sister #58 Jimco Champion. The Crowe Jimco lucky not to be reeled in by Chapman and Vail, finishing the event on seven cylinders.Local favourites Terry Rose and Bryan Basham in the #11 Highway One Jimco 2000 had pulled in time on the overnight leaders and were heading for a photo finish when flat tyre at the beginning of the last long lap of the day put paid to their outright win hopes. The team resolute with third outright.Notable, and a very spectacular exit from the Hunter Rivmasta Offroad Warialda 200 was Matt Martin in a massive roll-over in his single seat Jimco #121. Martin, now unsure whether he will continue his Australian Off Road Championship campaign at the final round in a few weeks’ time at the Albins Off Road Gear Goondiwindi 400.After 15mm of overnight rain, competitors were greeted with a perfect racing surface for the first laps of the day, with the dust ultimately coming through by the start of the long laps.

Werner and Sue Zettle in the Jarvi Super 1650 added the class silverware to their trophy cabinet, in an impressive field of 16 Super 1650 nominations.

Jarad Eveleigh and Billy Hutchen drove the M&K Plant Hire Croftwood Sportsman #322 into first in class and first in the family honours battle. The M&K Plant Hire team nominating three vehicles for the weekends racing, with the more experienced campaigner Mark Eveleigh in the Jimco #929 and Damien Penfold and Kylie Eveleigh in the #907 Jimco stable mate, both failing to finish with steering and CV issues respectively.