Kittle on the Gas 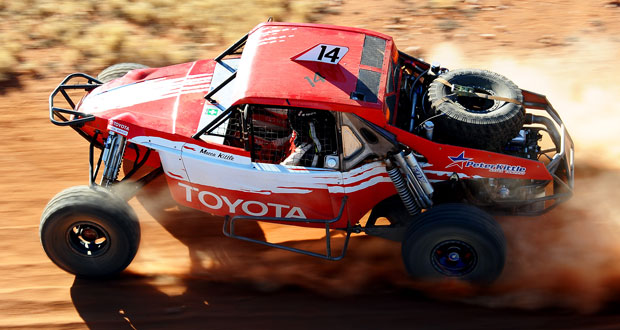 Peter Kittle Motor Sport has capped off a rewarding 2011 off road racing season with a podium finish at their first attempt at the Kickstarters Gascoyne Dash in Western Australia. Fresh from securing a second consecutive Australian Off Road Championship title, Peter Kittle Motor Sport unleashed their two car team at the event based out of Carnarvon, 1000km north of Perth.

After two laps of the 187km course at Bidgemia Station, it was Andrew and Matthew Kittle who brought the teams #14 Jimco home in second position. The brothers finished just 5 minutes behind Travis Robinson and Paul Currie in the #13 OBR Jimco, who won the event for the third consecutive year. Carnarvon local, Ken Styles and Josh Ellis finished third outright in the #44 Holeshot Buggy after battling with Kittle for most of the weekend.

The weekend started well for the team with David Fellows locking in second on the grid in the #1 Jimco, while Andrew Kittle slotted the #14 Jimco into fifth after the 13km prologue at the Carnavon Race Course on Friday morning. Fellows then got away to a good start on the first loop on Saturday, shadowing Robinson as they charged around the track. However, the gearbox in Fellows Jimco became jammed in fourth gear, eventually leaving them stranded in the riverbed less than a kilometre from the finish line. Kittle was left to fly the flag for the team and worked his way up the leader board, to finish second in an overall time of 4hours 46min 3.41sec. 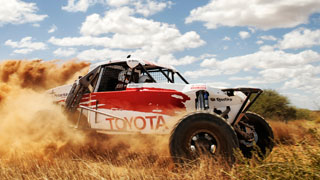 “We are happy with how the race went. We had heard a lot about the Gascoyne Dash over the last few years, especially from Outer Bounds Racing, and thought we would go over for a crack this year. We were always going to take my car but we also decided to take Dave’s after the cancellation of Goondiwindi, and we are all pretty impressed with the race layout and format” said Andrew Kittle.

“The track is different to anything else that we do. The nationals are more flowing and with higher speeds, and each track has its own characteristic, where this track has a fair mix of everything. There are a lot of good spots that you can open the car up into fifth gear and on the other hand you are often back to first gear as well. It’s a good test of everyone’s whole vehicle rather than just one aspect of it.”

“It was a very good test of our machinery. It was disappointing that Dave couldn’t finish due to mechanical difficulties, but this punched me up to second overall for the weekend, which we are really happy with.”

Initially it appeared that Andrew Kittle may have taken the outright win, after the organisers made an error in the application of a time penalty to Travis Robinson, however, this mistake was corrected on Wednesday, which allowed Robinson to take his third win at the event.

“We are glad that the organisers put Trav back to first, as he was the best driver there over the weekend.”

Team owner Peter Kittle echoed Andrew’s feelings, “as far as we are concerned Travis won the race, when we came second we were happy with that because that is where we should have been. Travis deserved to win it.”

“I think the Gascoyne Dash is a great event, with the terrain, where it is and the format all excellent. I am more than happy and we would go back again. Dave also enjoyed the track, along with the warm welcome from the Carnarvon locals. If they keep working on it, the Dash will become a big event” continued Peter.

2011 has become a landmark year for Andrew Kittle, after taking second outright at the Finke Desert Race and now second at the Kickstarters Gascoyne Dash.

“This year has been my best year by a long way. It is a case of getting used to the car and the pressure of the race weekend. I am not putting as much pressure on myself now as I probably did earlier, and have learnt that the results will come if you keep putting in the effort” said Andrew.

With the 2011 season drawing to a close, the team is now focusing their attention on 2012, which will see Peter Kittle Motor Sports take battle on three different fronts. Dave Fellows will campaign the new Jimco Trophy Truck in the Extreme 2WD class, Andrew Kittle will continue to pilot the Toyota powered #14 Jimco in Pro class, while his younger brother Matthew Kittle will take the reigns of Fellows current Pro buggy, which is scheduled to be converted to a ProLite over the coming months.

Peter Kittle Motor Sports would like to thank the event organisers, officials and fellow competitors for a great 2011 season, and the team looks forward to the 2012 season.