Hanson and Wells dominate the dunes 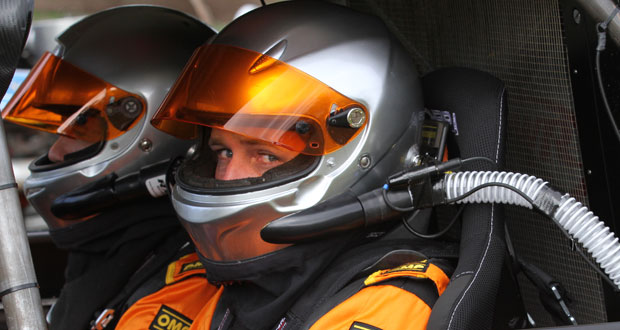 With 40 laps under their helmets, Matt Hanson with navigator Leigh Wells dominated the St Helens sand dunes today at the Performance Metals Australia Tas Sand Enduro after two heats of 20 laps.The SMU Racing Team have made the trip from the mainland to test their skills against the sand specialists in Tasmania. Hanson had issues during the break between heats, having to change a CV boot, but according to reports the Jimco will need minimal overnight maintenance and will be race ready for tomorrows green flag for heat 3.

Currently sitting in second outright after today’s racing and aiming for his fourth in a row St Helens victory is Tasmanian Scott Rockliff, who unfortunately went two laps down today after also suffering CV dramas. Rockliff was keeping pace with Hanson when half way through heat two a CV boot came off; Rockliff pitting to affect repairs and going down two laps to Hanson. The team are repairing the CVs in the overnight break and we’re told the car is ‘running sweet as’ and ready to take on Hanson tomorrow.

Darren Payne maintained his third outright from heat one and is sitting on 37 laps; Payne having an incident free run, the ProLite just not keeping pace with the twin turbo of Hanson. Payne is looking to finalise the Tasmanian Off Road Championship this weekend, currently sitting atop of the points leader board. 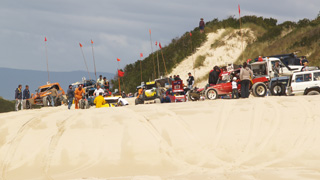 Today’s high attrition rate saw the majority of the field in the pits at one stage or another, but with most confident of fixing the returning to take on the dunes tomorrow.

Hanson will change navigators for tomorrows racing with Pit Manager Glenn Wells jumping in the navigators seat to get a feel for the new team Jimco; son Leigh more than happy to give Dad a shot of adrenalin.

Perfect weather made for perfect racing conditions and record spectators numbers through the gate; the crowd in awe of the Hanson machine and the ensuing battle with the locals.

Satruday 5 November  2:45pm
Matt Hanson and the SMU Racing Team have had a successful start to their Performance Metals Australia Tas Sand Enduro campaign, topping the time sheets in today’s heat 1 of 20 laps in the sand dunes of St Helens on the Tasmanian east coast.

Hanson with navigator Leigh Wells have made the trip from the mainland to the Apple Isle to compete in the 39th running of the iconic Tasmania event after the cancellation of round 5 of the Australian Off Road Championship.

Hanson said the Tas Sand Enduro is an event he has always wanted to do. With his grass roots in sand racing, the Portland Buggy Club member is keen to join the ranks of fellow Victorians – John Bloem, Rob Lamb, the Finck brothers and the Wells clan who have frequented the event in its long history.

Hanson completed the 20 laps in 56m:07s, just ahead of local Scott Rockliff in 57m:28s; Rockcliff looking to defend his current hat trick of St Helens victories. Darryn Payne was third after heat 1, all be it, one lap down on the front runners.

With one of five heats under their belts, the second heat running this afternoon and a further three tomorrow, Hanson was reported to be changing CVs during the break between heats and it will be touch and go if he meets the green flag for heat 2 on time.

Hayden Tatnell in his single seat Rivmasta had electrical issues on lap three and resultantly out of the heat along with Michael Donahoe out on lap one with engine failure.

A large crowed has gathered in the dunes to watch the specular with perfect weather enhancing their off road racing experience.