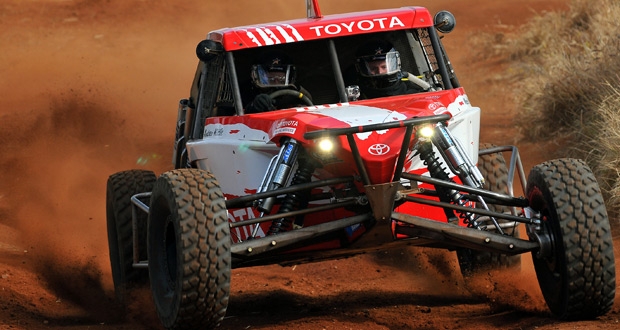 Andrew and Matthew Kittle made the most of their hometown event to finish second outright in Australia’s most prestigious off road race, the Tattersall’s Finke Desert Race. Kittle conquered the tough 452km track from Alice Springs to Finke and back, which left many experienced teams broken by the wayside in an overall time of 3:58.25 seconds, placing the #14 Peter Kittle Motor Sports Jimco in second behind the #410 F-150 of Greg Gartner and Jamie Jennings, who piloted the first truck to ever win the race.

Coming out of the blocks in 24th on Sunday’s first leg from Alice Springs to Finke, Kittle soon rounded up Tatnell and was out in some clean air on his own.

“I didn’t have any traffic to contend with, but at the same time didn’t have the gauge of making time on people. I had three or four moments that could have put us out of the race, but as always with Finke, you need some sort of luck to get a result and we did. We got down to Finke in 8th overall which I was happy with and it didn’t tweak until later that night that I was sitting second in class” said Andrew Kittle.

Leaving Finke 20 seconds ahead of Matt Coleman’s #55 Alpha for the race home, Kittle’s chance at making it back to Alice Springs were thrown into jeopardy just 2km from the start line. A cam sensor started to wreak havoc with the engine tuning, but fortunately a quick engine restart soon had the Kittle brothers on their way again. After getting back past Coleman, the race started to open up as attrition started to play its hand. With Gallard and Roe out of the equation they greeted the chequered flag in Alice Springs initially thinking they had locked away third outright, but soon discovered they had finished one place better.

Andrew and Matthew’s second outright placing mirrored their father’s best performance back in 2002 and the sense of occasion wasn’t lost on the brothers.

“The first thing they told me when they got out of the car was they’d equalled my best Finke result and that they were pretty sure they had beaten my time. So it doesn’t hurt to have a bit of in house competition” said a smiling Peter Kittle. 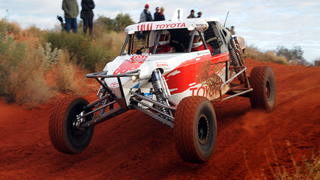 After starting Sunday’s race in pole position, Dave Fellows was in a prime position to charge for his fourth consecutive Tattersall’s Finke Desert Race win in the #1 Peter Kittle Motor Sports Jimco, however, 15km into the race a broken axle changed the game.

“This caught us a bit off guard” said team owner Peter Kittle, “but to their credit they (Fellows and Bergamin) got it going again and made it to Finke in a reasonable time. He then had an awesome trip home, to get back into the points for the championship.”

Starting the return leg from Finke to Alice Springs in 21st place, Fellows and Bergamin unleashed the fury of the twin turbo Toyota V6 powerplant, posting the quickest time for the section, 1:49.15 seconds. The effort boosted him to 9th outright and most importantly secured him the Australian Off Road Championship lead ahead of Finke winner, Greg Gartner and team mate Andrew Kittle.

Peter Kittle Motor Sports will now focus its attention on the Flinders 450, held at Baroota in South Australia on July 22-24.