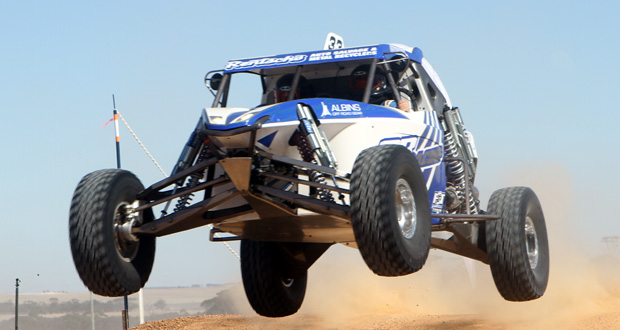 “Hyden certainly didn’t go as we had planned. We checked every component on the Jimco at least twice during preparation, but the brakes failed while we were hooking along at 220km/h in the prologue” commented Shannon Rentsch. “It was scary there for a bit, but we managed to bring the car to a stop and get back to the pits. That really put us behind for the whole event, so we were happy, and lucky, to finish in second place”.

The son and father Warrnambool based SR Racing team have now turned their attention to conquering Round 2, one of the most gruelling and challenging events on the 2011 calendar, the Tattersall’s Finke Desert Race held in the Australian red centre on the Queens’ Birthday long weekend in June.

The iconic event has provided mixed fortunes for the SR Racing team, with the high of back to back wins in 2005 and 2006 to the extreme low of breaking down within sight of the Alice Spring finish line in 2008. 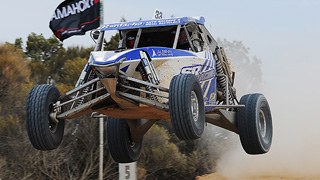 With a quality field of 99 racers nominated for the event, the team have left nothing chance. The Jimco has been completely stripped down and every component checked and checked again in readiness for the rigorous of the 220km Old Ghan Railway line track from Alice Springs to Finke.

The SR Racing team have also had a change for 2011 in engine builders, with Ian Rentsch going on to say, “our new Nissan Twin Turbo VQ35 V6 has been put together by our engine partner Confidyne Motorsports out of Tasmania. Andrew Lawson and his team have put together a strong engine package for us; it ran flawlessly at Hyden”.

“We’ve done as much preparation as we can. It’s now up to me to become one with the Jimco. We need to drive hard and fast enough to win, by the smallest margin, as a wise off road racer once told me” added Shannon. “Our competition is tougher than ever this year, so preparation, consistent driving and reliability are really going to be the key to winning.”

SR Racing would like to wish all competitors heading to the Tattersall’s Finke Desert Race a safe journey and successful racing.