Rentsch Flies at the Flinders 450

The Victorian son and father team of Shannon and Ian Rentsch have won the third round of the Australian Off Road Championship, the Bentley’s Cabin Park Flinders 450 held at Baroota, just north of Port Pirie in South Australia this weekend. The Rentsch’s win in the #33 SR Racing Jimco extends their AORC lead heading into the business end of the season.

After taking a conservative approach on the first lap on Saturday Rentsch then wound up the wick, hauling in Hanson’s early lead and ensuring he would start first on the road and out of the dust on Sunday morning’s second section. From that point he didn’t look back, winning sections two and three and taking the outright win in 4hr 45min 03sec. Ahead of Hayden Bentley in the #18 in second, and the Extreme 2WD Trophy Truck of Greg Gartner and Jamie Jennings in third. 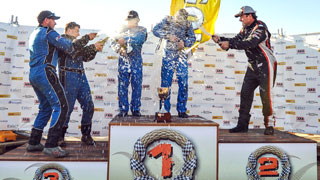 It was Rentsch’s first experience at the iconic Baroota track, which has been hosting off road events for over 40 year. “It is really different with all those berms; we’ve never raced on anything like that before. We started to get the hang of it on the second lap on Saturday and a bit more today. It’s a great little track, really challenging, you are pretty busy behind the wheel and with only a handful of spots you get into fifth you don’t get much of a break” said Shannon.

Piloting his single seat #18 Racer to second outright was an exhausted Hayden Bentle, who had to juggle the mammoth task of organising the event on his Baroota property while focusing on competing in it. “It is difficult circumstances trying to run the event and race, so I was happy to do that and not wreck the car. I had a lot of fun, but I am looking forward to bed in the next few days. This track has a bit of everything and the cars are really working around there, but when you have a car that works it is just awesome” said Hayden at the finish line. Starting sixth after a huge jump sent him off course during the top ten shoot out, Bentley moved quickly into podium contention on Saturday afternoon and motored home on Sunday to finish 13min 7sec behind Rentsch.

Nailing down third outright and the Extreme 2WD Class win was the big #410 Ford Trophy Truck of Greg Gartner and Jamie Jennings in a time of 5hr 07min 08secs. Gartner was locked in a close battle with the Robinson, Gallard and Geddes trucks all weekend and charged home in the final section. “We just decided to have a crack in the final couple of laps and put the car through what we thought it could do and it held together. We are rapt. We’ve done a lot of work to it since it debuted at Finke and it has paid off” added Gartner.

Conditions were almost perfect for racing at Baroota, with the rain the week before the race and then showers on Saturday night helping to keep dust to a minimum, especially with a breeze blowing in from across the Spencer Gulf towards the picturesque Flinders Ranges.

Fourth outright were Matt Hanson and Leigh Wells in the #1 Snap SMU Jimco. Hanson was in outright contention for most of the weekend, until brake failure in the final section of the race saw them overshoot a corner and get beached on a berm, then roll just 4km from the finish while making a charge to make up the lost time.

Having won the event when it was a South Australian state round in 2010, Andrew Mowles and Matthew Ryan drew on their Baroota experience to take the ProLite honours and fifth outright in the Australian built #135. They dominated the ProLite class, winning all three sections and setting themselves up for a charge at the AORC ProLite Class championship.

After withstanding the torrential assaults from the trophy trucks of Gartner and Gallard all weekend, Billy Geddes and Jamie Ward were dealt a cruel blow in the final stages of the race. A blocked air filter started to sap all the power from the V8 in their #441 Trophy Truck, forcing them to pull over and clean it, costing valuable time and relegating them to sixth outright and second in class.

Gary and Amanda Simpson drove their buggy to seventh outright and second in ProLite, ahead of the Super 1650 Class winner, Matthew Salt and Leon Hawke. Mal Yeardley and Jorden Russel were the final team to finish all seven laps of the 65km course and were rewarded with 9th outright and third in ProLite.