Rentsch Returns to the Winners Circle

The Victorian team of Shannon and Ian Rentsch have returned to the Australian Off Road Championship winners circle, taking victory at round 1 of the championship, the Komatsu Brooks Hire Hyden 450 held in the West Australian wheat belt over Easter. It was the team’s third outright victory at Hyden and the first since debuting the #33 SR Racing Jimco in 2010.

“We’ve had a quiet last couple of years and to start the year off with a win, I couldn’t be happier.” Said Rentsch at the finish line.

Rentsch finished the five laps of the 85km course at Smithy’s Place in a time of 4 hr 34min 51 seconds, 2min 36 seconds ahead of second placed #1 Snap SMU Racing team of Matt Hanson and Leigh Wells. Hanson had been within striking distance of the lead during the first two sections, until Rentsch took control on lap 4 and stretched the 35 sec margin out to over two minutes.

“It was a great start to the year but I would have liked to have won it. Rentsch pulled one out in the last section and had a massive crack to secure the win and that’s why he has won five championships.” Said Hanson 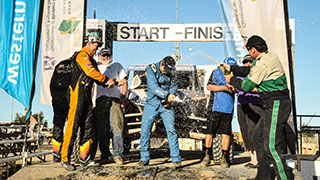 Port Pirie’s Hayden Bentley didn’t miss a beat on his way to third outright in his #18 Bentley Motorsport, greeting the checkered flag 9min 47 sec behind Hanson.

Despite closing the gap on Bentley in the closing stages of the race, Eric and Neil Phillips were forced to settle for fourth outright in the #96 Ballistic Racing, ahead of the fifth placed Gerald Reid and Werner Zettle in the Gulf Western Oil Pro Buggy.

After blitzing the track on Saturday afternoon and taking the overnight race lead, Jack Rhodes and David Pullino failed to start on Sunday morning after discovering major engine issues with the #91 Jimco. Which allowed Rentsch to start first on the grid and keep out of the thick dust that would hamper those further down the leaderboard.

Meanwhile Travis Robinson and Paul Currie returned to the race on Sunday morning after fixing the ECU issues in the #13 Jimco that had plagued them the day before. While out of overall contention, Robinson announced his intentions to challenge for the two remaining section wins and kickstart his AORC points campaign. He blasted away from his seeded position on the starting grid in a cloud of dust and wheel spin, he had soon sealed the Section two win from Rentsch and was on track to nail down the section three win over the final two laps, until an engine miss developed forcing him back to second behind Rentsch in the last section.

As the history books close on 25 years of racing at Smithy’s Place at Hyden, with the Smith family moving on to other ventures, the race teams will start to focus on Round 2 of the Australian Off Road Championship, the Tatts Finke Desert Race. Which will be held in Alice Springs on the Queens Birthday Long Weekend, June 7th-9th.Author: Randall Kilner