AORC young guns, Jack Rhodes and David Pullino have taken the early lead in their #91 Jimco at the Komatsu Brooks Hire Hyden 450 today. Starting second on the grid after the top ten shoot out, Rhodes quickly moved into first after the pole sitter, Travis Robinson, was sidelined with ECU problems in the #13 OBR Jimco. With a dust free run at the front of the field, Rhodes stretched the legs of the twin turbo V6 Nissan powered Jimco to post the blistering time of 55min 13 seconds during the first lap of the 85km course. Opening up a 28 second margin over the #33 Jimco of Shannon and Ian Rentsch in second. Reigning Australian Champions Matt Hanson and Leigh Wells are currently placed third, 6 seconds shy of Rentsch after a navigational error cost the team vital seconds during the opening lap. 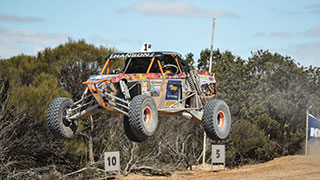 With twin turbo V6’s dominating the leader board, Gerald Reid’s #3 Gulf Western Oil Probuggy is currently the first of the V8 powered machines on the road. However Hayden Bentley is snapping hard at his heels, sitting two seconds behind Reid in his single seat Racer. Brad Cooper, with property owner Darian Smith in the navigator’s seat of the #968 BAT is the best of the local West Australian competitors in sixth outright.

Earlier in the day Shannon Rentsch had dominated the 14km prologue course, ahead of Travis Robinson and Jack Rhodes. However a spin in the Top Ten Shoot Out relegated Rentsch to fourth on the grid, behind Robinson, Rhodes and Hanson. The battle for pole position produced some spectacular racing as the drivers held the throttle wide open through the wheat paddocks, before turning it on for the spectators as they launched off the series of triple jumps at the top of Christies Hill at speeds approaching 150kph, resulting in huge leaps approaching 40 metres in length before the final blast to the finish line.

As the sun set on the WA wheat belt this evening the pits at Smithy’s Place were a hive of activity as the teams prepared their offroad racing machinery for four more laps of the 85km course on Sunday morning at 9am to determine the winner of the Komatsu Brooks Hire Hyden 450, round one of the 2013 Australian Off Road Championship.

The first in a series of short feature videos on the event has been launched on the AORC Youtube Channel today. “The Last Hurrah at Hyden” captures the colour and landscapes of what makes Smithy’s Place special in the eyes of offroad racers. Visit http://www.youtube.com/watch?v=IV9NiDqJWB8