“We are aiming high, we’re chasing the ProLite Class title this year and want the #101” said Wes Cowie of RevTech Motorsport when asked about his plans for 2013. “We finished second in ProLite class in 2011, so we’re pulling out all the stops to bring home the Aus #101 crown this year.” 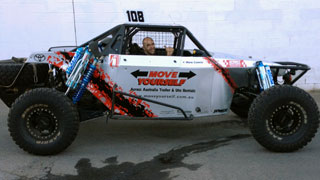 The RevTech Motorsport team are packed and heading from their Adelaide base across the Nullarbor to contest the first round of the Australian Off Road Championship, the Komatsu – Brooks Hire Hyden 450 at Hyden in Western Australia this Easter long weekend.

The V6 Toyota Aurion powered Prolite Jimco has undergone a major refurbishment over the off season, along with the addition of new ‘huge’ King Shocks on both the front and rear suspension. The team is excited to test the new configuration under race conditions. 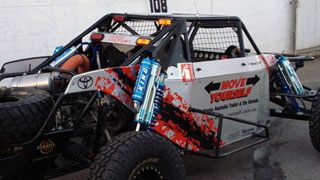 The Jimco is also sporting a new paint scheme, with their major racing partner, Move Yourself Trailer and Ute Hire, taking pride of place. When offroadracing.com.au visited the RevTech Motorsport workshop the attention to detail in the immaculately prepared Jimco was evident.

For Round 1 of the 2013 Australian Off Road Championship at Hyden Travis Milburn is undertaking the navigating duties and it is planned that Bill Cowie will take that role for round 2 the Tatts Finke Desert Race.

offroadracing.com.au would also like to thank the RevTech Motorsport team for their assistance in transporting equipment to Hyden.