SMU Racing Set For Round 1 Hyden

With the SNAP SMU Racing Jimco on the road to Hyden Western Australia for the season opener, SMU Racing will look to defend their title from 2012 starting at Round 1 of the Australian Off Road Championship, the Komatsu – Brooks Hire Hyden 450. 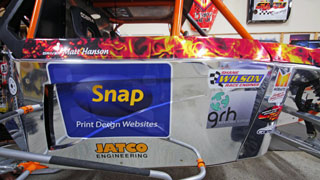 The car has had a makeover at Race Paint as the team welcomes its new naming rights partner Snap Print Design Websites, and new major sponsors Jatco Engineering and GRH Supplies, who together with our existing fantastic partners, have made their logos onto the new look SNAP SMU Racing Jimco.

offroadracing.com.au caught up with driver Matt Hanson this week and asked Matt how the team’s preparation was going into round 1, “as a team we are really looking forward to Hyden.  We really haven’t been out of the car since Lockyer Valley last November, going down to the Portland dunes at Christmas, racing Parker in the US in January and then racing at Portland in February.” 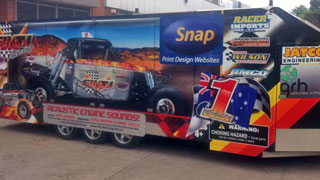 Hanson continued “it has been very tough few months for the team with Shane’s accident meaning we have had had to prep the car with Daren overseeing the prep and Tim Collard, who has worked a lot with Daren in the past with his cars, looking after the car. Overall we are happy, given it has been a tough time.”

“Shane continues to improve, which is fantastic, and at the annual SMU Racing season planning BBQ the team were thrilled to have Shane and Tammi there. We are hoping it will not be too long before Shane is back full time and playing his integral part at SMU Racing” added Hanson. 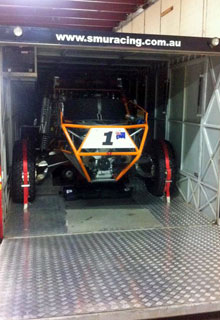 “The competitor list for Hyden looks good, with some quality guys racing, in particular Shannon and Ian Rentsch and the Robinson boys, which no doubt will mean that the pace will be fast all weekend. We are very happy with this year’s engine built by Shane Wilson and, after seeing it first up at Portland, again, it has not disappointed. Given the new point score system this year where points are allocated on sections and not outright placings, combined with all five rounds to count, we think that finishing will mean everything in this year’s Championship.”

SMU Racing would like to thank its commercial partners for their continued support during 2013.

Stay tuned as SMU Racing heads west and follow the team at smuracing.com.au, the team’s Facebook team at Start Me Up Racing and on the dedicated Youtube channel SMUracingAU.