The South Australian Riverland welcomed back the Australian Off Road Championship for the first time in 22 years on the weekend, with the Toyo Tires Riverland Enduro being held at Waikerie. The five lap race through the fast flowing paddocks and mallee scrub was dominated by Jack Rhodes and David Pullino in the Rhodes Racing #91 Jimco, who took victory in an overall time of 3hr 23min 57.78sec. Despite securing pole position during Saturdays prologue and top ten shoot out it wasn’t all plain sailing for Rhodes, with a shower of rocks in the early Sunday morning tussle with the #13 BF Goodrich Tires OBR Jimco of Travis Robinson resulting in a broken finger for the driver. However with electrical issues forcing the retirement of Robinson on lap one, Rhodes and Pulino quickly charged and put their stamp on the event to take their maiden AORC victory. 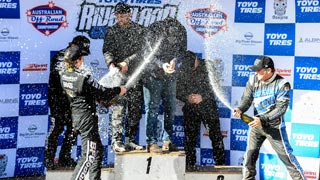 “The last few years we have got close and it is nice to have finally cracked it at home, with everyone here” said Rhodes post race. “It has taken a long time to get where we are. We are still young to the sport and we have worked hard to compete at this level.”

While Rhodes led from the front, Shannon and Ian Rentsch were forced to dig deep to earn their second outright placing in the #1 Hogs Breath BF Goodrich Tires Jimco. Seeded 15th, after failing to finish the prologue with an engine miss, Rentsch quickly worked his way into striking distance of the podium, then pounced when Hanson, Haby and Schiller fell by the wayside in the closing stages of the race to finish 5min 8 sec behind Rhodes.

“It was a great track, especially when it dried out after the rain this morning. It would be one of the quickest I’ve raced on, similar to Griffith and Mildura.”

The Australian Off Road Championship now heads north to Coffs Harbour for the fourth round of the season, the Pedders Suspension Coffs Coast 400 on 12-14 September.