Home / New new new / Watt the? Back on Track

Watt the? Back on Track

The Sea Lake Mallee Rally’s 40th Anniversary has seen the history books dusted off and with many a tale to be told. Tradition seems to be the overarching tone. Watt the? Motorsport are an integral part of the off road legacy with tradition running through their team and their Sea Lake campaign.

The team will be debuting their new turn key Jimco this weekend, sporting the number #120, which was the number used by Charlie Albins, a former Australian Off Road Champion and a name well known in the sport. The link to Charlie Albins is one close to the heart of Watt the? Motorsport; team owner and driver Justin Watt explains “Charlie’s the brother of Ivan Albins and Ivan is my father in law.” 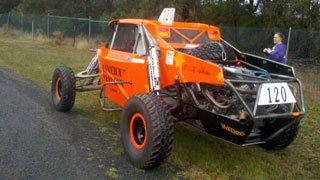 Although Justin is relatively new to the sport, by off road standards that is, he is fast making a name for himself in his own right. Justin’s first full time drive was a Jimco ProLite which he campaigned consistently on the AORC circuit before putting on the market after the 2011 Finke. During 2012 he kept his hand in by preparing and navigating for Andy Ryan in the Saber ProLite buggy at selected event across the country.

The team’s new drive is a turn key Jimco, built as the Watt The..? Aussie Special. The build was completed in February 2013, after which hen the Jimco made the voyage to Australia in the container with Andy Ryan’s new Alumi Craft.

Running a Nissan VQ35 HR Confidyne built engine driving through a torque converted coupled to an Albins 5 Speed Sequential Transmission, the team are confident they have the right package to run at the front of ProLite class and push the front runners for a good outright result.

“It’s my first time racing at Sea Lake, and I’m looking forward to the challenge. I’ve heard so much about it; it will be great to actually experience it” added Justin. “Having said that, the whole team are excited about going back to Sea Lake. Ivan entered the first Sea Lake 40 years ago, but legend has it that they broke the buggy before it got to the trailer.”

The What the? Motorsport team are also pleased to have seasoned racer Dave Hartwig on board as navigator. Dave is sitting in for Melissa until her planned returned to the navigating duties at round two of the ARB Australian Off Road Racing Series at Griffith or round three at Goondiwindi. Melissa Watt, formerly Albins, has a long off road navigating career herself; first stepping into the role with Glenn Owen at Midlura back in 2001.

Melissa went on to say “it will be great to see the new Jimco on the track. Everyone is excited to be back at Sea Lake and running the new ARB Series.”

The Watt the? Motorsport team would like to thank the tireless efforts of friends and family who have helped them get to Sea Lake, in particular, Ivan and Kerry Albins, Darby’s Paints Ballarat, SPW Powder Coating.