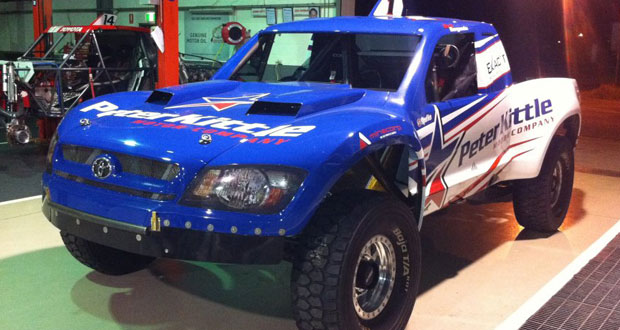 Dave Fellows has only done 30 kilometres or so in the brand new Peter Kittle Motor Sports Jimco Toyota Hilux Trophy Truck but has predicted he will have an ‘armchair ride’ in this year’s Tatts Finke Desert Race to be held this weekend June 8-11.

Fellows, as a five time winner of Australia’s greatest desert race, is set for another short test drive in the vehicle that has been air-freighted into Australia from the USA just in time to make the start of the 37th running of the Tatts Finke Desert Race.

He also reported that the difference in terms of driving the Trophy truck as compared to the buggy was not as great as he had expected, but wasn’t prepared to be over confident as to the likely performance simply saying that he will “tell everyone that on Monday night at the finish”.

Engine builder Shane Wilson went to the USA during the build of the Jimco machine and said today that the engine used in the first shakedown run yesterday was an installation unit.