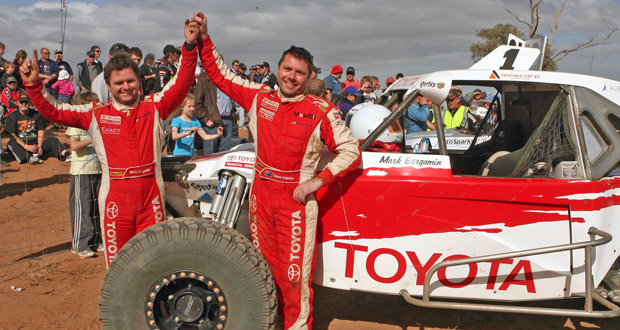 David Fellows and Mark Bergamin have returned Peter Kittle Motor Sports to the top of the podium, after taking victory at round three of the AORC, the Bentley’s Cabin Park Flinders 450 last weekend. They crossed the finish line in their twin turbo Toyota V6 Jimco in a time of 5 hours, one minute and ten seconds, ahead of Dan Auricht and Grant Connelly in second and Brett Taylor and Peter Treis in third outright.

Held at Baroota, just north of Port Pirie, the Bentley’s Cabin Park Flinders 450 was a late addition to the 2011 Australian Off Road Championship, filling the void left vacant by the cancellation of the Griffith 700. While the track has been a regular part of off road racing in South Australia for 40 years, it was the first time since 1980 that it had hosted an AORC round.

“It was different compared to most of the tracks we’re used to on the off road circuit, but she was a real drivers track and quite challenging in spots” said David Fellows, driver of the #1 Peter Kittle Motorsport Jimco. 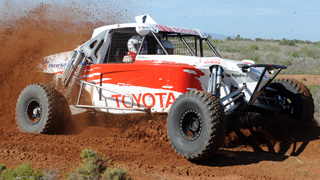 The Baroota track is famous for its berms and canyons, and it didn’t take long for Fellows to feel at home.

“The berms were typical of an Alice Springs track” he said. “The berms were good; you can railroad them and really hold the car in. They didn’t get any rougher and it was really just the new sections that were put in that did. A couple of the holes got deeper and it was different every lap. You had to be careful and read it very precisely. Give it 6 months and a bit of rain and the next race here will be perfect.”

After initially prologuing in second place, Fellows slipped back to eighth in the Top Ten Shoot Out. But it wasn’t long before they were charging through the field in Saturday afternoons two lap section, posting the quickest lap of the race and ending the day with the race lead.

“The back brakes locked on and caused us a bit a grief in the top ten shoot out, and we lost a few seconds by the time we got them off. But it wasn’t too bad once we started the race, we got held up a little bit in the dust but once we got in clean air we were able to make up a bit of lost time. We didn’t get any dust on the second lap which allowed us to peg back a bit of time.”

While Fellows started first on the road for Sundays five laps, he had Auricht and Robinson hot on the heels of the Peter Kittle Motor Sport Jimco. But he was able to draw on his experience to keep it out in front, to finish the 455km race just 38 seconds ahead of Dan Auricht.

“Danny didn’t let off all day. This morning we thought we may be able to relax a bit at the end of the day, but from the start he got the jump on us and didn’t give us chance to have a rest. It was good fun racing today.”

“I’d like to thank Hayden and Kylie Bentley and their team for putting together such a high quality event in such a short time frame. They have put in amazing amount of work into this place over the past seven weeks so that we could have this race” said Fellows at Sunday nights presentation.

Fellows win opens up a handy lead for the team’s AORC title defence.

“I think we are 18 points in front” said Fellows, “so that puts us in a pretty good position, but still not good enough where we can relax. There are still two rounds and we’ll see what pans out after them. Hopefully we can get it in the bag at the Pines.”