Hedge by an Edge 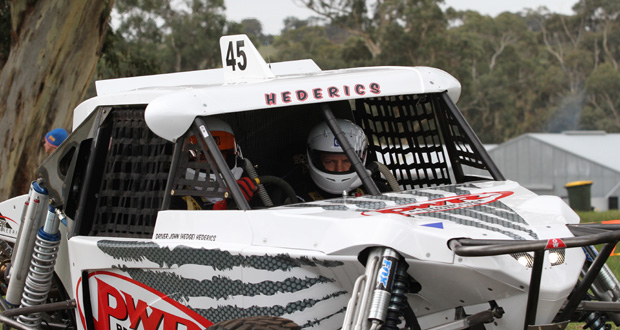 Off road racer and a true gentlemen of the sport, John Hederics and navigator John Williams have driven their new Nissan V6 twin turbo charged Jimco to the ultimate to take day one honours at the Glenroy Plains Produce Enduro in near perfect racing conditions. Hederics and Williams led from the get go, prologuing 8 seconds quicker than last year’s winners, Justin and Owen Anderson.

Frequent downpours overnight had organisers concerned, but as the sun rose over green grassy paddocks, it would reveal a perfect off road racing track. The only effect of the rain, a few dampened swags and their occupants. 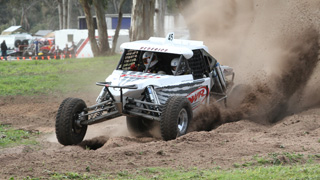 Hederics, renowned for his 4WD and two wheeled driving capabilities, is a legend of the Australasian Safari taking home numerous Safari victories, both on two and four wheels, racking up 6 motorbike victories. Moving into a Pro buggy with a new Jimco earlier this year, the HRA team debuted at round 2 of the Australian Off Road Championship, the Tattersall’s Finke Desert Race in June, ending their race early on Day 1.

“This is a great event. The organisation has been fantastic. I’m very happy with the car, learning more and more about it with each lap. The sandy conditions though could definitely be hard on gear, so we’ll pace ourselves tomorrow, aiming to complete all five laps and score a finish” commented Hederics.

In what has to be the drive of the day, Matt Hanson and Leigh Wells have improved on their 19th start grid position for day 1 to finish in fourth outright after the two lap 50km dash. This is the first run for Hanson in the newly imported Jimco, and Hanson had this to say after today competition “great venue, fantastic event. The new Jimco is performing flawlessly in its first run. I hadn’t driven it until I unloaded it from the truck last night. I was happy with my prologue result as it was the first time I’d drive the Jimco competitively. In today’s two afternoon laps, I was becoming more and more comfortable with its handling and performance and my aim for tomorrow is to finish the five laps and get a finish on the board for the Jimcos first outing”.

Sunday’s racing gets underway at 9:30am where teams will tackle five laps of the 50km Moorex track.