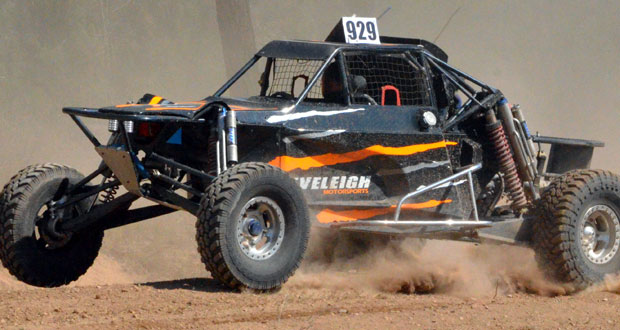 Damien Penfold, driving brother in law Mark Eveleigh’s M & K Plant Hire #929 Jimco, has pounced on the strong field of New South Wales Championship contenders at the Nabiac Airport Challenge to take outright victory by 5m:34s over Philip Page and Mark Hemmings #148. It was a bitter sweet drive for Penfold and the M&K Plant Hire team, Damien choosing at the last minute to steer the team’s single seat Jimco after the passing of a close family member late last week. Leading from the front of the field, after prologuing first with an 8 second gap back to Justin Guy #19, Penfold put down consistent lap times to bring home the Jimco after an emotional weekend of racing.

Michael Spokes and Eric Hulme in the #116 Rivmasta rounded out the podium. A quality field of 39 entries greeted the prologue green flag with only 12 completing full race distance at was is touted to be one of the toughest tracks on the New South Wales circuit.

Fourth outright and the first Super 1650 home was Ian Hill and Peter Ghaleb #204 with Carl Calcagno and Jen Peters #241 taking fifth outright and second in class. Gary and Joshua Hyde in the Bravo #335 took home the silverware for first in Sportsman class and sixth outright.

In a close battle for seventh, eighth and ninth, Mark Cowie and Brett Blackshaw pipped Anthony Lia and Christie Mitchell but 30 seconds to claim seventh, with Derek Rose and Michael Densley just over a minute behind Lia in ninth. Rounding out the ten was the youngest of the Hedley’s, Rikki and Bryan Worms #94 only ten seconds off the pace of Rose.

Peter Sowter #985 clocked in at eleventh outright with Warren and Tamalee Barron #258 the last of the field of the field to record full distance.

Event Information, including results, can be found here.