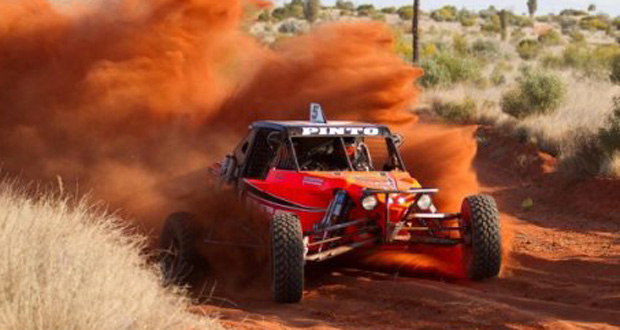 Andrew Pinto and Joel Pritchard have won the Autosparky Tour De Sandhills Off Road Enduro held at the Mt Ooraminna Off Road Racing circuit. Pinto set a blistering pace in the Honda powered Pro class Jimco in prologue, to be a clear 15 seconds ahead of second place Locky and Paddy Weir in their ProLite Jimco and a further 27 seconds further down the list in third place, the Pro class ex OBR Robinson Porter of Jason and Jane Adami. The first leg of the 32km course was two continuous laps. Pinto and Pritchard enjoyed the dust free run, being the first competitors away at 3.00pm on Saturday afternoon, followed by the rest of the field at one minute intervals.

The starting grid for the night leg again saw Pinto get a dust free run, putting in a time only 20 seconds slower than his day time run for one lap. Weir finished in second place only one minute behind with the Adami buggy in third position. Wayne Cullenane set a blistering pace in the Sporties Extreme 2WD machine starting 2 minutes behind the whole field in the dark and coming in, in fourth position with a time of 23.51. As the rest of the field continued passed the chequered flag and into the pit area, and after a quick check over of the vehicles, competitors lined up for a second night leg.

This leg would see the demise of #269 Scott Raven with alternator trouble and Dave Jiles #274 with gearbox problems. Andrew Pinto continued his winning form with another sub 20 minute lap. The rest of the positions went unchanged, however Steve Jenstch did get the teething problems sorted out in his Extreme 2WD turbo powered ute and put in two very smooth consistent laps.

Sunday morning saw another two laps of the course; Andrew Pinto finished these two laps three minutes ahead of the Weir ProLite buggy and third over the line was the Porter Pro buggy of Jason and Jane Adami. Wayne Cullenane lived up to his nick name “WILD” when he missed his starting time. Originally out of position four, he started from sixth and began his charge through the field until he came up on fourth position Rick Schembri. The two machines locked wheels when trying to get through a tight “U” turn, only 5km from the start/finish line.