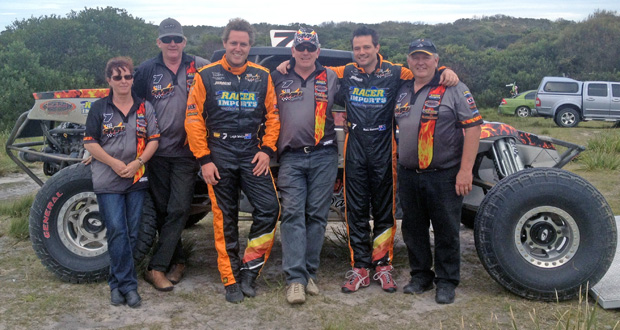 SMU Racing have recorded their first victory in the Shane Wilson powered Jimco on the weekend at the Performance Metals Tasmanian Sand Enduro. The gruelling 500km race through the sand dunes of St Helens saw the SMU Racing Jimco maintain a fast pace all weekend over quick locals Scott Rockliffe, Darren Payne and Hayden Tatnell amongst others.

After the third lap of heat 1 the team were never headed for the remaining 97 laps with the 500kms being completed in 4 hours 55 minutes – an average of over 100kms an hour over the tough 5 km sand course.

Driver Matt Hanson was extremely pleased with the way the car performed over the weekend. “The SMU Jimco ran flawlessly and with the exception of one CV boot which we replaced after heat 1 we really had no issues. The Tasmanian Sand Enduro would have to be one of the most gruelling races in Australia and to give the car a good hit out and put the drive line under the stress of a race like this and get a result was very pleasing”, said Hanson.

“For the first four heats we really went as hard as we could so that any final new car gremlins could be sorted with 2012 in mind. When the final heat came round we slowed a bit with aiming for a finish for what is an Australian iconic event. The pace was definitely hot all weekend and you could not afford to slip up given the calibre of drivers chasing. To win the event given its rich history and many famous names on the trophy meant a lot. Shane Cottee Desert Prep has done a magnificent job in getting the car to the finish line at that pace all weekend”, added Hanson. 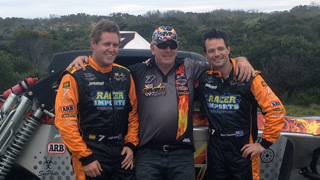 Team Manager Glenn Wells said that it was the aim for SMU Racing to come away with a finish. “The people of the Tasmanian Off Road Car Club and in particular Cara Tatnell were so fantastic in helping us to race in Tasmania in what is one of the country’s great events. We were all excited to get the team’s first win in the new car and are looking forward to the 2012 season with great anticipation.”

SMU Racing will now do some minor suspension testing before the car heads to the sand dunes of Portland for some rest and relaxation over the Christmas break. The Jimco will then get pulled down in January for the start of 2012 season by Shane Cottee Desert Prep.